The truth behind squirrels

I never trusted squirrels. Everyone thinks they are so cute, so harmless. “Look at the fluffy tail and the tiny little eyes” – is what children say when they watch a squirrel climb a tree. In all the books and movies they are used to play the role of a naive, lovable animal. But they cannot fool me. The first time I looked into their little black, pearly eyes I recognized squirrels are not just busy and harmless nut collectors. I thought I had them pegged. But the truth is, I had no idea what was really going on back then. And now it might be too late.

You know, I really wish I just saw curiosity in their eyes, but there wasn’t. It was pure calculation.

It all started two years ago. I just moved to Long Beach and started my new job when I first noticed them. They were sitting in a tree watching me. They followed me through the whole city to work and even accompanied me back home in the evening. Not once did they show a sign of fear or respect. You know, I really wish I just saw curiosity in their eyes, but there wasn’t. It was pure calculation. I tried to ignore them, I really tried. But no matter where I went they were there already. So I started to keep an eye on them too — secretly, of course. I would probably not be sitting here telling you this if they had found out.

I spent weeks in the park. While I was pretending to read or listen to music, I watched exactly what was going on. After a few days I knew every single squirrel. I even gave them names: Kate, the one with the especially fluffy tail. Barbossa, the one with only one eye, and of course John, the one with the curl on his forehead. On my fourth day of observation I saw something that changed everything.

It was a casual Friday evening in Long Beach. The sun had already disappeared below the horizon. The last light of the day was fading. Most people were heading home from work. Some took their dogs for walks and a brave handful were doing yoga on the open grass area in the park. No one paid attention to the four trees at the outermost edge of the park's grassy lawn. No one except me, of course. Despite the dawning darkness, I could see everything from my observation point.

The squirrels were gathering. I could count more than 15 tails but I bet there were more hidden in the dense twigs of the pines. Some of them were familiar, most of them not. Besides the common red squirrels, there were also a strange, bigger and black version of the species. They sat eerily quiet as if they were waiting for something. There was no time for me to wonder what was going on since at that moment I saw a group of raccoons appear from the shadows. Suddenly, a movement went through the squirrels. I could hear them chirp; the raccoons answered with high squeaks. I didn’t need to understand animal language to imagine what they were talking about.

“There you are. Finally. What took you so long?” asked the squirrel queen, a gray, particularly fluffy and big individual.

The raccoon major hissed loudly, “We are not as small and popular as you are. We cannot move freely through the city. At least not when there’s still light. As you are well aware.” All of the raccoons were well fed, but he wasby far the fattest of them.

“Let’s not fight about that. What news do you have for me?” That was the squirrel queen again.

“Rico found a way into the canals. Our scouting troops found some important water pipes of the city.” A smaller and unbelievably dirty raccoon proudly straightened himself with the words. The squirrels contributed a chirping applause.

The major interrupted them harshly. “Don’t get too excited. We had to retreat. The canals are rat territory and they were not exactly open for negotiation. I lost three of my men and I won’t endanger more of them. Not while your kind is sitting in trees all day, enjoying a lazy life in the sun.”

The words seemed to anger the squirrels. “Don’t you dare call us lazy!” shouted the queen.

“I’ll dare as long as you let us do the dirty work while you do nothing,” the major replied.

More angry hissing from the squirrels. Then the queen spoke up. “What do you want?” she asked.

“I want your warriors supporting my troops to secure the water pipeline in the canal.” The major turned his broad body and pointed directly at the queen.

The fluffy squirrel squeaked as if she was laughing. “That is ridiculous. A squirrel warrior will never enter the canal.”

Her words get broad support from the surrounding squirrels. “Then there will never be interruption of the city water supply,” answered the raccoon major.

Even in the animal world, politics are complicated.

I could not help but smile. Even in the animal world, politics are complicated. In this moment another group of animals appeared and a smile froze on my face. At least 20 fluffy white and black skunks had just arrived at the trees. Their tails were waiving synchronously as if they were enjoying their late entrance.

“Who’s talking about interruption? Don’t you all think that a contamination would be more than enough?” That seemed to be their leader. Other than the raccoon major or the squirrel queen, the skunk dictator did not stand out among his subjects, apart from the frightened stares they threw at him. I recognized that everyone seemed to respect this leader. Even the squirrel queen sounded kind of obsequious: “Sokrates, my leader, I greet you.”

The raccoon major said nothing. “My dear friends. Don’t you see it? A fight against the rats is no solution, an alliance is. Rats are rodents, just like us. They are supposed to fight on our side, just like the mice and the rabbits. We need their support. Only together can we conquer the world,” said Sokrates, getting emotional in his speech. “We will defeat human kind and show them their place. We will create a new world. A world where rodents are the leading species.”

Everyone, skunks, raccoons and squirrels were cheering together. “No more hiding in the dark. No more sleeping on twigs. We’ll have the softest beds and the most delicious food. Let’s form a group of raccoons, squirrels and skunks who will enter the canals together and start a negotiation with the leaders of the rat clan. I will personally lead this mission. Who will support me?” The cheering turned into a battle cry. More and more animals were stepping forward and standing at the side of the skunk dictator. “Who will support me?” he asked again, the battle cry became even more fierce.

“Brave warriors on my side: let’s find the rats, let’s win them over, let’s conquer the world!” he screamed the last words, supported by his battle group. They stepped away and with this, the secret meeting ended. The raccoons disappeared in the dark of the night. The squirrels spread themselves into the trees of the park and were acting as natural and innocent as you can imagine.

I got it all wrong, you see. The squirrels are just one small part of a bigger conspiracy. They are the spies that watch us, while the raccoons and skunks attack. But I had seen them all. I knew their plan. Over the next few days I desperately searched for their entrance to the canal. I did not sleep. I did not eat. I scoured through the city following any sign or movement of a raccoon, skunk or squirrel. But you should know by now that those species are smart. They tricked me, again and again and again.

“We have to prevent them from meeting the rats. If they win them as allies, Long Beach is lost, human kind is lost,” I end my report desperately. My hands cling to the armrests of the mint green sofa on which I sit. “Don’t you understand?” The man that I am facing jotted a few notes in his pad of paper. “Everything is alright Mr. Samson. I do understand”. 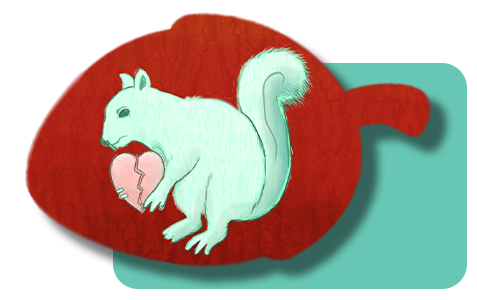