Feel free to fill in the rest of the story

Editor: What the hell is this, Joel?

Me: A couple stories.

Editor: Yeah, I figured. What is it about? It makes no sense.

Me: I mean, it’s in theme, isn’t it? It’s a bunch of vignettes dancing around a core, untold story.

Editor: Joel, what the hell does that mean?

Me: Well, a vignette is generally described a short scene or literary device that—and this is where it fits into this issue theme—feeds or comes together with a larger whole. The larger whole is implied and pretty much left to the reader to put together.

Editor: So you were too busy to write a full short story?

Me: I mean, yeah but it’s also testing the waters for a larger story, and the vignettes fit in with the whole come together as a theme.

Editor: Okay, whatever. We’ll run it.

The body, the browser

The pounding strain this over-the-counter amphetamine drip puts on its heart is the only connection I have to the body outside my browser.

I’m not there to see or feel through it, but its legs must have atrophied by now, and the pain from the scaly ass-ulcer is just starting to cut through my kranked-out haze. Its face is compacted under the two and a half pounds of plastic, hard drives, microprocessors and the pair of lenses I customize my world through. A beer pop-up ad interrupts my monologue and sends an echo through the whole eight by four feet of my subterranean home. A festering rash on the body’s forehead, cheeks and eyelids isn’t the only price of virtual computer access.

“Something wrong with the reviews,” I feel the mouth mumble over and over again as my perception peers through the eyes and lenses to a web of nodal points spanning a multiple of pages, hotlinks, jpegs, spreadsheets and years upon years of employee genocide, mind control and a market controlled on a whim. Why work for a better home when it’s safer to rot in a state-subsidized and advertiser-funded tube-coffins? Something wet touches the body’s leg, either the ass-ulcer started bleeding or the feed bag sprung a leak.

Its mouth inhales nicotine and Norco laced vapor brought to it by Pfizer-Juul inhalation tube, its eyes are blink-typing the rash of employee disappearances posts to the /chan board. Pizza and pedophiles have nothing on this, nothing on a full indoctrination program that’d make Soros blush, blow tower seven out of the water and send Hoffa turning under what’s left of Giants Stadium. 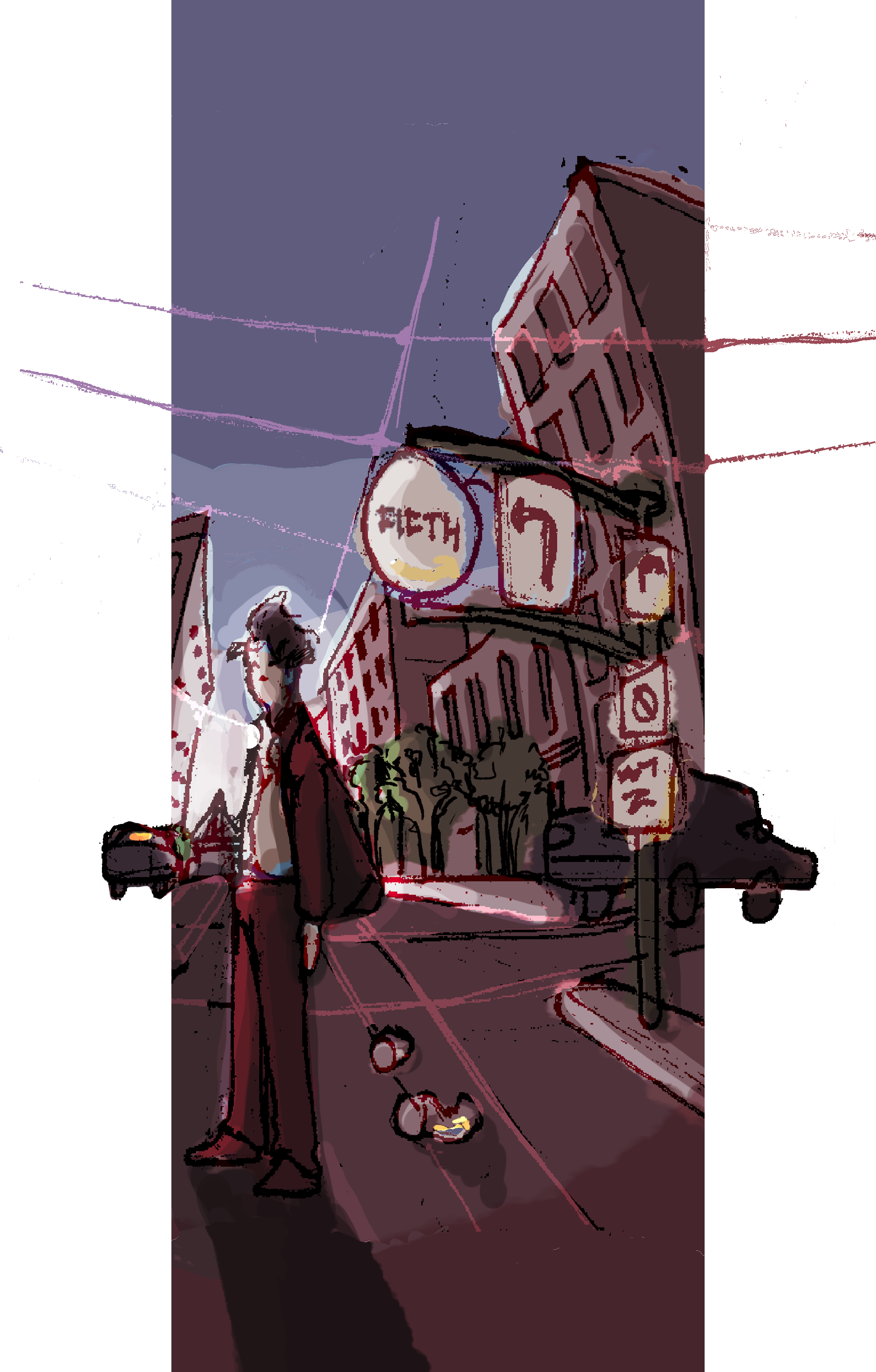 The only light in the coffin of a room is a CRT tv turning on every 40 seconds to blare half a decade old beer ads.

“It works every time,” the gnarly, bandana-ed man on screen grunts before the CRT shuts off and allows his burly, graveled voice to distortedly echo and impose itself through the four concrete walls. Darkness again, the subject’s naked body is cold and coiled on the ground, drooling for the next ad to break the pitch black silence.

An eternity of seconds pass, “Classy enough to contain only four ingredients: barley, hops—” The subject drags his body up to the screen to bathe in the golden bubble-screen light of pouring lager.

The words classy and four stir something up in him, it’s the last memory he had. He remembered hours, days, weeks or years ago when the subject was first going through the checkpoint before his orientation.

“Floor four, huh.” The officer said as he scanned the subject’s person. “Future product reviewer over here, that some pretty classy shit. I hear it’s like the old Google offices up there, bean-bag chairs and catered meals.” With one last sweep of his magnetic wand, the guard opened the gate to the subject. But that was just a memory.

The subject is now in a white room, he stares into the dusty computer monitor as the research team preps him for this first review. The reaper in a lab coat lays the subject’s hands across the center row of keys, another straps the subject’s arms down and another holds the subject’s eyes open.

“We’re going to show you a beer bottle jpeg for 30 seconds.” Says one of the sterile-white reapers, “and you’re going to write 50 words about how that beer makes you feel. Okay?”

The subject nods, a tallboy of generic lager flashes on the monitor, he writes the review:

I gotta say, this light beer works every single time. Sure, I might not feel like the most interesting man when I drink it. But if it has been a long day and I’ve earned it, cracking open a [redacted] light is the silver bullet for those gnarly workday blues.

The review wasn’t from the subject, it was from something inside him, some planted, festering idea of what [redacted] light is supposed to be, feel like and mean.

“Good job kid,” says the reaper holding back the subject’s eyelids. “Give us 25 for the next one.”

The subject drools, a long-neck of craft lager flashes on the monitor, he writes the review:

Damn, [redacted] is artfully crafted. Truly, I’m not worthy to drink this thing of beauty. It like a symphony of hops, barley, maize and water.

Drip feed a reviewer enough buzz words, and they’ll do the advertising for you.

“Alright boys,” one reaper says to the others. “That’s proof positive, release him into the wild.” The one holding his eyes open lets them close, another unstraps the arms and the subject lifts his hands from the keyboard as if they were never held there at all.

The reviewer opens his eyes hours, days, weeks or years later. He’s in standing outside of [redacted] grocer on the corner of Fifth Avenue and East 74th. The reviewer blinks. He’s in front of the liquor aisle. Cases of [redacted] and [redacted] light are fixed in his view. His hands tremble in resistance as he pushes himself to reach for either one beer cases. He stops. He screams. He closes his eyes and when they open, the reviewer is lying in the street. Police are clearing pedestrians away from a manhole. A car is approaching.

Look on my works and despair

I’m fiddling with the buttons of my suit, freshly ironed and pressed, gazing out to Fifth Avenue from behind tinted windows. One of the companies I own stock in is dredging up more of the sewer so my city can funnel more of my people into the subsidized housing beneath me, the gall of it. Keep them above ground, I say, keep them buying.

“The data analytics firm is dropboxing the report right now, mama.” My assistant reminds me while I try to capture a moment of silence in gridlock traffic. Owners are never alone, I could be committing suicide by carbon monoxide poisoning in my coffin of a town car, and the drones would still be nipping at my heels to manage.

“Did we take the necessary precautions?” I ask the tweed-clad, bald assistant as if I could muster up the ability to give a single fuck. He jabbers as I watch steam and sewage erupt from a manhole. Who needs an ivory tower when you have a tinted town car? “What did we do about the participants?”

“Mama,” I hate this prick for calling me mama. “The reviewers were taken into the study for the primary purpose of training, all additional outcomes were kept strictly on paper, monitoring of the reviewer’s reactions were also off-grid.”

“No shit,” I mumble as I watch the steam clear to reveal two startled, sewage drenched men, each holding a bottle of now deeply contaminated beer. One of them was enjoying what he thought was a leisurely street side patio meal with a long-neck from our craft lager line, the other was wallowing what he thought was miserable street level panhandling with a tall-boy of our generic lager line. The brand labels matter much less when they’re both caked over in shit. “Did we take care of the remaining reviewer subjects? They’ll grow into rattlers if we leave them in the field too long.”

“No mama, the remaining subjects are still out and about.”

“Where the hell is the bottleneck for taking care of them then?” I ask this wrinkly ball sack my father hired to advise me. “We wrote nerve agent into the research team’s budget for a reason.”

“Excuse me, mama, our accounting division ran a cost-benefit analysis and found a full liquidation to be…excessive.”

I can see the cops clearing the sewage covered masses from the manholes blast radius, putting money into fully kitting out the bastards-in-blue was certainly worth it. “Sounds like a wet team’s the silver bullet, doesn’t it?”

“Mama, the subjects are decommissioning themselves at a fast clip, why not let dogs find their place to permanently lie?”

The pussy-footedness of this impish, middling class ninny makes my guts churn. “No, that’s not enough. I want full coverage, friends and family too. Another scandal would wreck our insurance premiums.”

My nails dig into my palm. “Excuse me?”

“A full subject rubout could easily go public, the brand can’t afford to take that hit right now, the limits of your ownership Misses—”

I launch myself from the seat and smack him, I smack that human ball sack till he’s blue. “Look on my works, you squealing pig, and despair! Nothing besides us remains.” I point out the now moving car’s window. “Look around at the decay of this colossal wreck and tell me what I own doesn’t stretch far and—” My assault on the pencil pusher is interrupted by a series of bumps under the towncar. “God damn it, what did we hit?”