Imagine you are sitting in a lecture hall, bigger than any you have ever seen before. Around you are no less than 800 other students. The professor is standing in front, talking into his microphone, indicating at some points on the big screen in the middle of the lecture hall. Nobody seems to be listening. Imagine three girls in front of you eating salads while they plan their next weekend trips on their laptops. Some guys have beers they brought from the cafeteria sitting in front of them. They do not even try to be discreet when opening the bottles and toasting to the beginning of the semester. A group of 10 people arrive 20 minutes late. Another group leaves after an hour. All the while, the professor does not pay any attention and just goes on with his lecture.

If you can visualize all this, you’ll have a pretty good picture of what a regular course at a German university looks like, so you can probably imagine how astonished I was when I first entered an American lecture hall. I am an exchange student from Germany staying in Long Beach for two semesters. Originally I studied in Stuttgart, in the south of Germany. In the first weeks of the semester I not only recognized many differences between studying in Germany and the United States, but got to know a whole new study experience.

First of all, there is the university itself. Most of you probably do not notice, but the Long Beach campus is huge and beautiful–especially compared to most of the campuses in Germany. You will not find any rolled turfs and fountains there. To be honest, a thing like a campus does not really exist either. Usually the university buildings are more or less spread over the city. Sometimes you have to drive through the whole town to get to your next class and there is no such thing as a shuttle or a campus police to call for an escort.

Here is some hard news for the sports fans among you: There are no competitive university sports in Germany.

Here is some hard news for the sports fans among you: There are no competitive university sports in Germany. Usually the university offers a sports program, but it is only recreational and is held in a small sports arena. Some universities organize sports events like team races, but most of the time it is more about drinking than it is about the sports. It is actually kind of funny to see all the parties on the campus without anyone getting drunk. At my home university, we have an event that is comparable to the Week of Welcome, except that almost every group dispenses beer, wine or even cocktails. You can probably imagine what that leads to in the end.

At German universities, there is just one important rule: at the end of the semester you have to get through your exam. Nobody really cares how you manage that. At this point I have to admit that it is simply amazing how much extra service the universities in the United States offer: a fitness center, bowling alley and several swimming pools, including a jacuzzi? We can only dream about that in Germany.

But in the end, American students do pay for all the extra service with their student fee. Studying here is expensive–I had to learn that the hard way in my first few weeks. It is not only the student fee, but all the small things that sum up over the semester: all the textbooks, the parking permit, the TAP card for the bus. 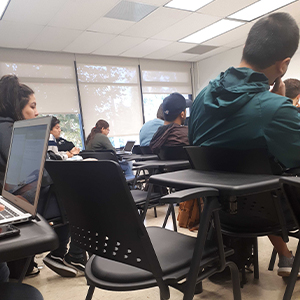 When you study in the United States as a German student, everything seems more intense. In some instances this is positive, like when it comes to the fitness center, the countless clubs and the competitive sport teams with their own arena. I have not yet decided if I like the small classes; they definitely have their drawbacks, such as when every professor knows your first name. Professors in Germany are not even allowed to talk to me like that.