An Applebee’s restaurant on the moon and a human base on Mars: the new movie from James Grey pictures the future of space travel, as one expects from a science fiction film.

Optically, “Ad Astra” is fun to watch and not just because of Brad Pitt. There are spectacular scenes in space, such as when the main character, astronaut Roy McBride, drops off a space antenna and falls towards Earth, wildly rotating on its own axis. Even with these scenes, it is the plot and the storytelling that make this movie so controversial.

It is a well-known conflict and one cannot help but wonder why it has to take place in space.

McBride is on a mission to contact his father, Clifford McBride, who went on a mission to find intelligent life in the orbit around Neptune. When it comes to the big showdown between father and son, all that matters is their relationship: the worship of a son and the betrayal of a father. It is a well-known conflict and one cannot help but wonder why it has to take place in space. If those two had met at a lonely place on earth, the outcome would probably have been the same. 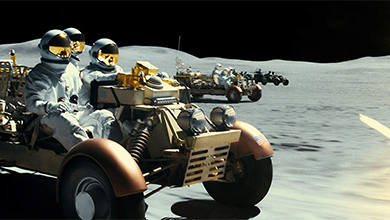 On the other hand, there wouldn’t be dramatic scenes like the moon rover chase or the attack of space baboons if the story was set on Earth. In those scenes, McBride stays calm, no matter how spectacular it gets. The contrast between action and stillness is the base of the storytelling. All is kept minimalistic–with less camera settings, less music and less talking. At the same time, it varies greatly in the narrative speed. Some moments you want to press stop because you don’t realize what’s happened. For example: Was he just really attacked by gigantic space baboons?! The next moment you would like to fast-forward. So his father cheated him, can it keep going now?

Was he just really attacked by gigantic space baboons?!

At this point it is worth mentioning that Brad Pitt’s acting is great, subtle, emotional and still very personal, but in the end it runs out on that.

Some people will hate the movie, some people will love it, but before you consider watching it you should ask yourself: Does it have to be action all the time? Should there be no open questions at the end of a story? Is straight storytelling and constant narrative speed important for me? If you just answered yes three times, you should stay away from the movie. Even if there is still the question of what happened to those malignant, mesh-eating space baboons.