The weekend of September 26 should have been just another weekend of attending a convention as part of the press, something I have done many times before. I would go to the con, take some pictures and arrange some interviews. At the conclusion of the convention, I would take the audio and edit it into an audio story to play on 22 West Radio—something I have done many times before and I enjoy doing. However, this convention wasn’t like any other I’d covered before. It involved the chance of a lifetime: to meet a group of friends I have only interacted with online.

I went to TwitchCon, the convention that is sponsored by the live streaming service Twitch. The convention itself brought together a collection of community members, streamers and exhibiters to show off their various products. Streamers are also able to network with each other, learn skills and meet up with their viewers. In past years, Twitch has held the annual convention in different cities across the state. This year they decided to hold the convention in San Diego.

Plans needed to be made weeks before the convention. I planned on attending with a group of seven other people months before ticket prices were even announced. One of my friends who I knew by his Twitch handle Spades13 threw out the idea of going one step further than just a meet up: he wanted to rent a house through Airbnb.

Initially, I wasn’t planning on joining in on the Airbnb idea for two reasons. First, I originally was planning on going to the convention with two people from 22 West Media. However, due to events out of our control, that plan fell through. Second, and a more powerful reason, it was due to my nerves. I was excited about being able to meet my friends in person, yet at the same time I have read many horror stories about people who have met online. Some stories go from having things stolen to physical harm. 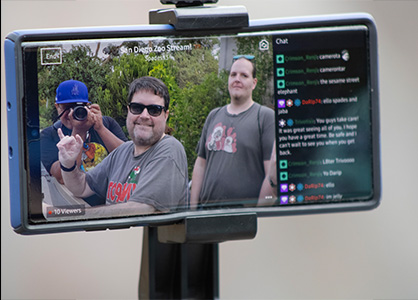 Things became easier to prepare for as the date of our giant meet up grew near. As it came up, we began comparing travel times. With a group of people around the world, times varied. The longest travel time belonged to TehCaps who was coming from the United Kingdom and, surprisingly, the shortest wasn’t me. While my route was two and a half hours on the Amtrak, the guy coming from Arizona, Javatar, had his whole trip completed in just over an hour. My specific travel date on Thursday involved an early morning trip to the train station. What is normally a lightly packed train was overly busy because of a Dodgers day game in San Diego. Thankfully, even though they were busier than normal, it didn’t delay the arrival time. Arriving in San Diego, the first person I met, Spades, came out to help me bring my bags into the house. Walking up the walkway, I met Exilkani,  TheGamateers, Javatar, Caps and Holly. I would meet the last person in the group, Futilesparkle, later that night. As soon as I met everybody in person, all my nervousness disappeared. I was happy to discover everybody who I talked to online was also the same in person.

After getting situated, our first outing as a group was to the San Diego Zoo. There, we made jokes amongst ourselves and had some fun conversations. One of my friends who is on a “stream every day for a year” challenge took the chance to turn on his live stream to show his viewers the animals housed at the zoo and show our interconnected community that we actually exist in person. The next few days were full of the grind of getting the story, with my main objective being talking to the charities and game developers to see what they had planned. The convention itself was a sea of purple, the official color for Twitch. When convention coverage wasn’t taking place, we still tried to make an effort to hang out with each other in addition to trying to arrange meetups with other people we knew from Twitch.

The time that the eight of us shared together was incredible and an experience I treasure. Throughout the weekend we had time to hang out, play games and continue conversations that originally started online. At the end of the weekend, we all had the same thought: “I can’t wait til next year.” 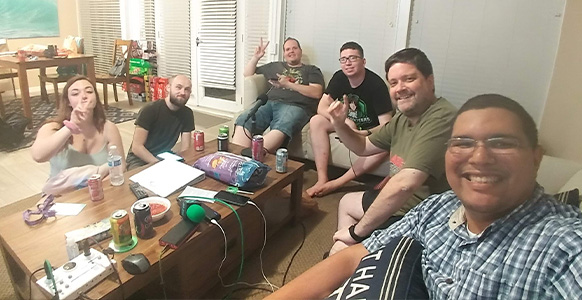