One day, I was an ordinary International Studies student with a regular copy editing job and the next day I find myself assigned to cover something completely outside of my area of expertise—the B.A.T. State III exhibition at the Kleefeld Contemporary Art Museum.

On September 9, our university’s art museum opened its doors to the public and revealed the art of  Women in Conversation with El Nopal Press to the public. Co-curators Anita Bunn and Francesco X. Siqueiros had collaborated to bring together a collection of lithographs, prints, photographs, paintings and more from 37 women artists that breath life into the cultural conversation over the California-Mexico border. The political activism of the artists are represented through the printmaking of Siqueiros’ El Nopal Press and brings to light the Latin American struggles, experiences and cultures brewing here on the Southern Californian border. 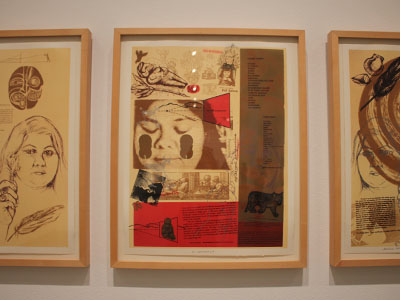 Let me preface my experience with a disclaimer: I don’t know shit about art. But having a geographic concentration in Latin America and the Caribbean, I felt that widening my horizons a bit and delving into the realm of Latin American art might be beneficial to my studies, work and overall perception of art. This is how I found myself at the exhibition on an early Friday afternoon for a press preview.

I arrived a few minutes early and was greeted by Amanda Fruta, the Public Affairs and Communications Specialist at the Kleefeld Contemporary. She encouraged me to feel free to walk around before Bunn and Siqueiros arrived, so I attempted to blend in with a group of French women being led on a tour with little success; I eventually veered off and ventured on my own.

If you’ve lived in Los Angeles your whole life then you might take for granted the very blurred lines between Latin American and traditional American life. Even if you aren’t from Latin American heritage, the chances of you still being somewhat incorporated into the culture are highly likely. As a result, it’s easy for some Americans to become benighted to the plights Latin Americans face to this day.

I kept this thought in mind as I walked through the gallery and a couple pieces of art in particular jumped out at me. The first was a collection of monoprints of drug lord Pablo Escobar, who we are all familiar with, and Colombian footballer Andrés Escobar. The connection between the two may be faint to those who don’t follow soccer, but the Colombian footballer scored an accidental goal against his own team at the 1994 FIFA World Cup, thus allowing the United States to secure a win, jeopardizing bets placed by drug lords who also funded the team, and ultimately resulting in Escobar’s assassination. The other piece that caught my attention was a mural depicting the story of Chavez Ravine and relocation of Latinos in the community that Dodger Stadium now sits upon. Being a huge Dodgers fan who is also Latina, I was happy to see a piece of art that represented this history of the stadium that I feel most people are unfamiliar with. 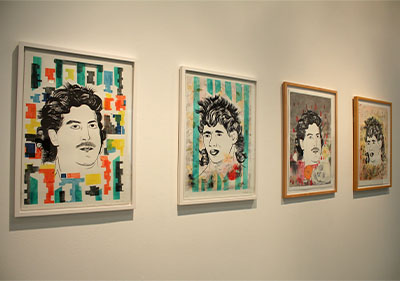 Once Bunn, Siqueiros and Marion Wesson, one of the featured artists in the exhibition, arrived, Fruta and I accompanied them on a tour throughout the gallery to enlighten my artistically-hindered mind and I drew a connection between all the works of art: they were, in some form or another, celebrating or bringing to light aspects of Latin American culture. Some were highlighting the effects of white nationalism and its impact on Latin American culture, others commemorating the bridge between myth and culture that is so prevalent throughout Latin America. Not only this, but through the collaboration between El Nopal Press and the women artists, their voices of political activism shone through to the surfaces of printmaking to make a democratically-empowered statement. 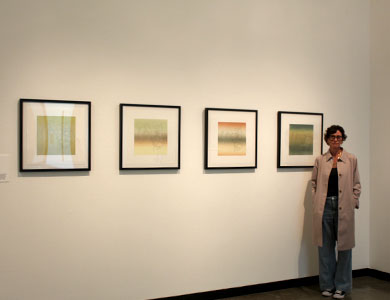 The free exhibition will run from September 9 until November 14 but there will also be various panels featuring the artists and printmaking workshops to get involved in throughout the run of the exhibition. For more information regarding dates, panelists and locations, contact the Kleefeld Contemporary and get an exact schedule of events.