Sitting around was fine, watching fantastic faces
divining their lines while croaking and joking
over marvelous monologos till she’s round the bends and
the SSRIs and Skyy Cherry become friends.

But by twelve I host Conana on derelict, dead televisions.
By one I swim with Adults and Saiyans in SuperJails before Portly Pat
preaches to 700 about her white Jesus and his diamond mines and white collar crimes.
My Jesus was Black and preached alongside Cowboys doing Bebop
and Robot Chickens going Pop, while getting and breaking bread
with his disciples facing what you and I were too privileged
to understand.

He escaped to Sacramento while she streamed Fargo and sipped Milagro.
Then he was back
new fiancee, new kids, a new life all his.

Energetic with an enigma of feeling bad
I ran to take an L in El Monte.
Trying to dose between micro and macro
while smoking you out of my memories
and not falling asleep to the TV.

But if I measure things in fifty-ones to fifties, fifteen hour work days and fifteen units --
No rest except for four-hours on the freeway with five hours of sleep,
desiring a crash along the way, I can always watch telly after four hours of therapy.

Break down
on Calico tracks.
Mechanical minors bemoan
a bottomless pit of mumbles,
moans, mother, motherless, maga-moms
staring down all us veritable vegan vagabonds.
“Hey, where’s my line” a questioning comedian quipped.
“He, he” cackles the prospector doing blow phew, phew, phew
in a jug made for Mountain Dew. “Mounting Who?” Mounting the Dew.
Crackle internal intercoms “Stay seated while working with my kinks.”
Mumbles and mingles with muscular miners moan for drinks on us finks?

Please excuse me.
Forget those lines.
Onto the next ride. 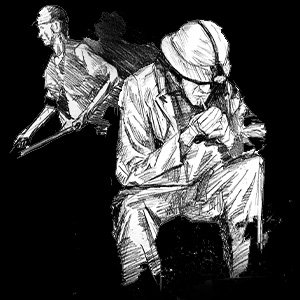 You made it.
Hold stomach
when exiting
those rides.

Did you know
it’s okay to
punch cryptofacist

sock that klanning
klown in a Orange Kounty
bar since he’s smoking a
cigar and spotting off
[neighbor]
with a hard R.

Crossfaded confidence in
Godwin’s Law after toking on
that raw and downing Claws.
I’m just here
to chew bubblegum
and read Carrie to scare me
before that clown became more Steve
than Stephen King if you ask me.

Oh, those alt. right white knights
thinking they’re so bright for
pretending not to be
blights. Best be pissing
pants with fright.

ACAB, ACAB
you moderate corncob.
All the way back
to Nixon, Goldwater,
and all the R.s
forgetting harder Rs
from then on. 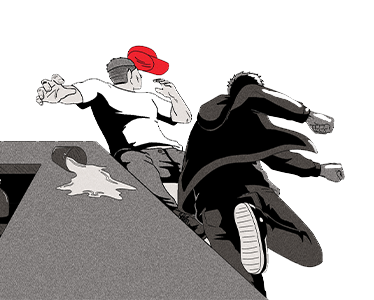 Tell it to the dark web of intelectual
conmen, before they all become
hasbeens, that it’s nothing more than
twee and kawaii to punch nazis, since so much more is necessary.