A unique community exists within Long Beach State’s animation department, one where everyone is just a bit too crazy and entirely too comfortable with each other. We’ve seen each other at our worst, dressed in pajamas, unshowered, unrested, and making coffee to salvage what few brain cells are left at 4 a.m. It’s a personal bond, one we experience on a near global level after the 24-Hour Animation Competition.

Starting in 2002 at Laguna College, CSULB art department head, Aubry Mintz, dared his students to stay after class to finish their projects, simulating the environment of an animation studio. Starting as a late night endeavour, the lock-in soon dwindled to five students enjoying the sunrise in celebration. As he tells it, “They got more done in that time, in that 24-hour period, than they had in the whole semester.”

“This contest was created to help people understand the rigors of the animation industry.” - Aubry Mintz

Inspired by this madness, Mintz led the challenge every year after that initial midnight marathon. In 2004 Mintz gave his first prompt, The Chicken or the Egg. The next year there were so many students that he had to put them in teams. He realized the events popularity when the contest made CSULB a permanent home in 2007. In 2010, the contest opened up to other schools statewide, and then nationwide. Four years later, 24-Hour Animation went international. Today, 65 schools (two of which were high schools) from 9 different countries offer up 1,455 students eager to spend their night animating, a record breaking high of participants.

The premise is simple: Get yourself a small team of wonderfully insane people. Wait for Mintz to announce the prompt and use the next 24-hours to create a 30-second animation.

On Friday, October 4, 11 teams from CSULB huddled behind Mintz as he got on the live stream. The room was filled with all different majors: animation, illustration, film, computer science and even dance.

This was my third and final year competing in this tradition and I wanted to take my time and really find out what makes my fellow students tick.

Stepping through a jungle of laptop chargers and tablet cords, I found myself occasionally dodging sleeping bags hidden in corners and under tables. The food was the mostly unsustainable, trash kind of snacks but enough to feed a small village.

I met a lot of exhausted students who shared their thoughts on the task at hand. It’s a combination of dark humor, caffeinated delirium and a sort of pessimistic optimism. There's crying, arguing, hysterical laughter and stress-relieving screams happening on the rooftops. In the end, the current feelings could really be simmered down to a resounding “UGH” from Julia Feng. 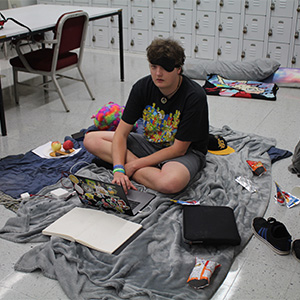 A tired student working through the night.

Through the stress and overwhelming tasks of animation, one thing remains constant: the energy. It’s rampant, intoxicating and fueled purely by the department’s unity. Mintz explains how the contest is “building a culture” within the department that is spreading across different schools around the world. “This contest was created to help people understand the rigors of the animation industry,” Mintz said. “But also to think about how to work in teams and collaborate, which is so much of our art form.”

Today the contest is almost completely student run and has taken on a life of its own. Through all the problems and bouts of panic, there was a comfort in knowing that we were all doing it together.

Team Bullphrogs decided in the beginning that they were all in this ride together. “[If] the director is like ‘alright, fuck it. I’m out’ and jumps out of the car, we’re all jumping out,” they told me.

Rodrigo Gonzalez first competed in 2017 and has joined every year since. ”[I wanted to] take this chance to be collaborative, learn about teamwork, and meet other artists, other ambitious students,” Gonzalez said.

And when everyone in the room has the same kind of insanity as you, you have found your people.

“I’ve been to four different Cal States and I feel that the sense of community here is exponentially higher,” Animation Professor Walter Santucci said. “People just move in with their blankets and sometimes they bring cooking materials and it feels absolutely normal.”

Though it saddens me that this is my last year competing, I couldn’t be more thankful for the kind of opportunity and community the 24-Hour Animation Competition has given me through my years here at CSULB. It’s a space for pure psychotic creativity, chaotic enthusiasm and an undying love for the craft. It was never about the prizes or even the quality of the product in the end. It was about the shared struggle and drive with your teammates and competitors. And when everyone in the room has the same kind of insanity as you, you have found your people. 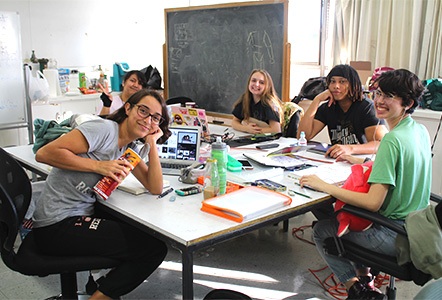