Finally, cider—this may have been the first thought of those who enter Ficklewood Ciderworks at its opening on Saturday in the East Village of Long Beach. Others may have just been curious about the city’s first cidery opening and why exactly this beverage has everyone so excited. Regardless of the motivation - all those people were drawn to Ficklewood and made for a crowded opening event.

The star of the evening was the cider, so It was no surprise that the line at the bar was getting longer and longer throughout the evening. Most people decided to order a selection of different ciders. They have melodious names such as Moonmist, Bramblebark or Wisevine and are colored from an orange-yellow to a bright red.

In the back of the cidery, visitors were able to see the huge tanks and barrels where the cider is made. The ingredients are apple juice and yeast. This sounds simple in theory but is rather complicated in practice. The different types of apples or yeast, the addition of sugar or use of various fruits lead to new, complex tastes. Ficklewood’s Original Cider, for example, consists of three different ciders that are all fermented individually and with different yeasts. It is, therefore, kind of a cuvée. 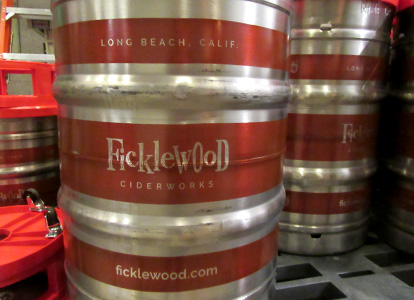 The first sip of one of Ficklewood’s ciders might surprise you. One can taste how they are more like wine than beer because they are fermented and not brewed. They are not sweet, but rather dry and the characteristic apple taste is completed by blueberry, vanilla or hops aroma. “We are going to educate everyone as we learn as well, in what a good cider should be,” Stefan Enjem said. Enjem, together with Joe Barrier, are co-owners of Ficklewood Ciderworks.

Barrier and Enjem are next door neighbors, their homes connected by a ladder going over the fence. Through their friendship, the two learned that Enjem has diabetes and Barrier has celiac disease, and cider is something they can both safely drink. Unfortunately, they were unable to find the cider they wanted in stores back then. That is why they started making their own cider three years ago in Enjem’s garage. “We kept improving and improving and it went well. There is nothing like what we have in the stores so let’s bring that product to Long Beach,” Enjem said.

The two friends both have a strong connection to the city, which is why they involved the community in their cidery. Everything in this bar is made in Long Beach and from Long Beach citizens—from the cider tap-handles to the logo of the cidery. Even the wood inside is from Signal Hill. It’s not without reason that the two owners call the cidery the “living room” of Long Beach. 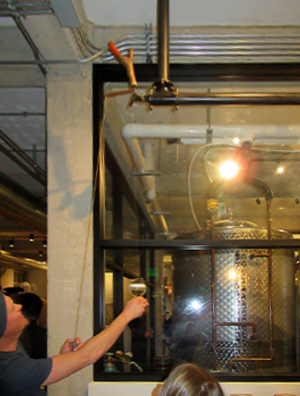 The biggest attraction of this city living room is, without question, the cider tap that is nine feet tall and right under the ceiling. On opening night, friends were already competing with one another about who could pour cider with the smallest mess. The ceiling pour is impressive to watch and makes a nice photo moment. It is inspired by Spanish style cider that is traditionally poured from over the head and this long-distance pouring method is said to improve the taste of the cider. And besides that, it’s a lot of fun!

Families, friends, couples, dogs—everyone is welcome at Ficklewood. A food truck was present at the event to provide food. That is only offered on special events but Enjem and Barrier plan to have a lot of them. With the opening of the Ficklewood Ciderworks, Enjem was more than satisfied. But most importantly, the visitors seemed to be as happy as the owners. The warehouse style and the open, well-lit seating area were well received. “I enjoyed the atmosphere. It is a nice place to relax and to meet up with friends,” says Megan Trott who was at the opening with some friends. A lot of people from the Long Beach community seem to share her opinion. Enjem remains positive even after the first few weeks, “Since our opening we have been busy every day.”