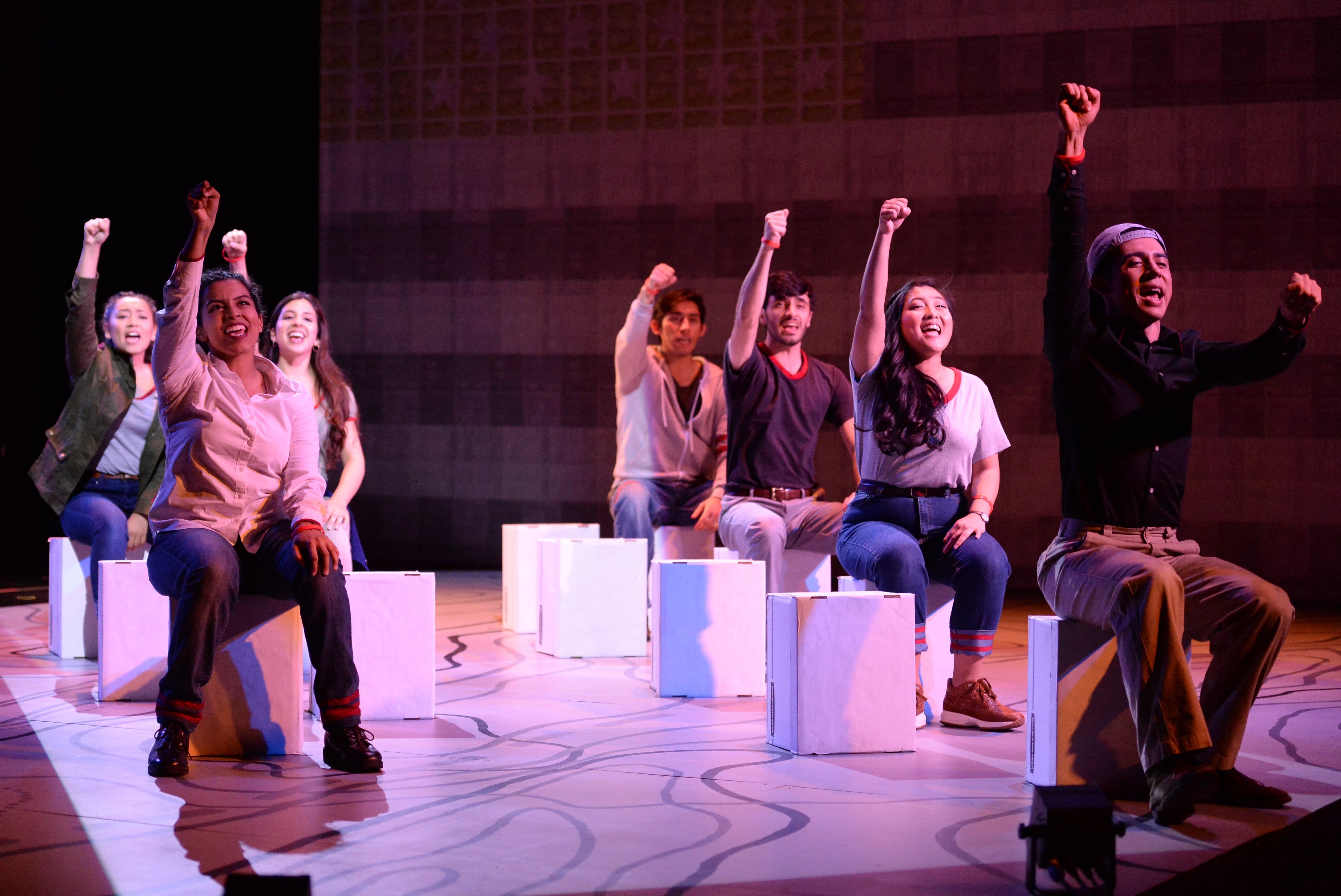 What have you brought with you? What are you leaving behind, and, once you leave, what will you take back with you?

These are the questions posed to the undocumented students whose narratives sit center stage in California Repertory Company’s original production, “Dreamers: Aquí y Allá,” which debuted Friday night to a full house.

The audience was left in tears by the production, visibly shaken and questioning what it means to be “American” and who gets to define it in the first place.

The show is a part of “Devising Democracy,” a four-year program by Cal Rep that challenges  actors and directors to create democratic spaces and address social, economic and political  issues in American society, the art of theater acting as a catalyst for a larger conversation. 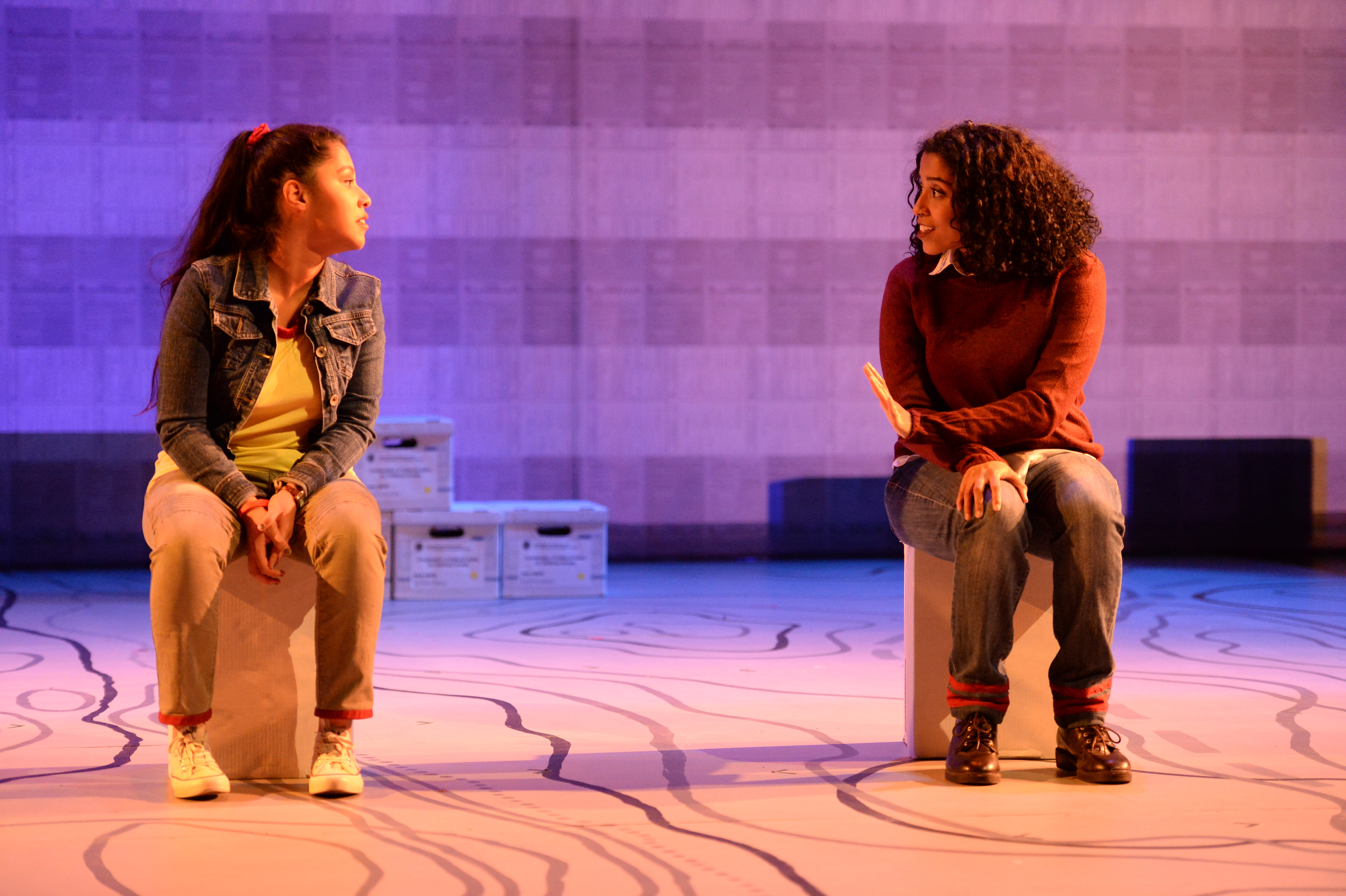 Directors Andrea Caban and Julie Granata-Hunicutt and members of the cast joined 30 Dreamers on the California-Mexico Studies Center’s final study abroad trip last year to write the script. The trip was organized in partnership with El Colegio de la Frontera Norte, a prestigious Mexican university and think tank based in Tijuana.

“Dreamers: Aquí y Allá” addresses the nearly 800,000 Dreamers who have had their lives upended by the repeal of the Deferred Action for Childhood Arrivals program last year. Although U.S. Citizenship and Immigration Services have continued to renew applications for those previously granted deferred action, the March deadline is a constant reminder that the children brought illegally into the country by immigrant parents are still far from welcome by the administration. 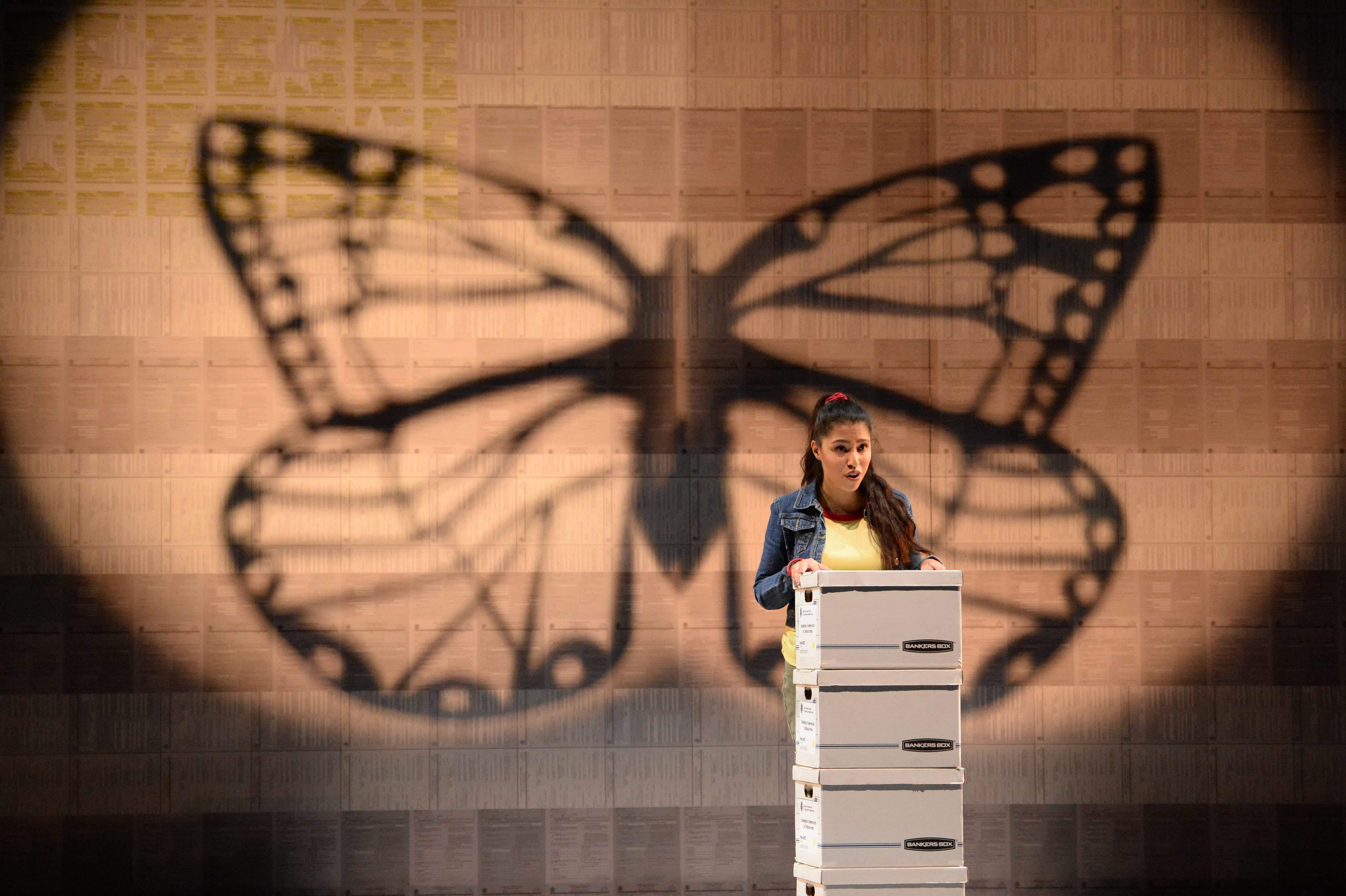 Staging choices by scenic designer Paige Bossier reflect the displacement of undocumented immigrants in almost everything from the filing boxes used interchangeably as props to the topographical map of the border stretched across the floor. More notable is the backdrop, a unique take on the American flag composed entirely of DACA forms that Dreamers need to submit to USCIS. It is as literal as it is symbolic, setting the tone for the entire production long before the lights even dim.

A self-professed verbatim theatre piece, the show lacks a conventional plot and initially reads as strictly informational. It begins by explaining that most DACA recipients don’t know that they are undocumented until they begin to need items such as a driver’s licence or work permit. They arrive as children, many still too young to remember the places that they were born. It goes on to discuss the economic contributions that recipients offer to the U.S. and the extent to which many must go to even qualify for the program. Some don’t even speak their parents’ native language and for many, America is all that they have ever known.

“Dreamers” blends in narratives of four students — Jimena, Catalina, Mateo and Francisco —  throughout the production. All of them are composite characters born from nearly 300 pages of stories and interviews of the Dreamers who returned to their birth places in Mexico using DACA’s now-defunct advance parole, which allows recipients to travel abroad and re-enter the country legally.

While there may not be a clear, neat solution yet, “Dreamers” challenges its audience to stand up and use their voices and their votes to speak up for the Americans who cannot.

Leslie Valdez’ performance as Jimena brought the audience to tears when she and her friend discussed Jimena’s fear of rejection by her father who remained in Mexico — the courage it took for Jimena to leave without guarantee of being able to return. Catalina, played by Natalia Caraballo, meanwhile, moved audiences as she tried to convince her mother to let her stay in Mexico, only to be reminded of the dangers of remaining there as well as the reality of being too American to even belong there. She is, in many ways, indicative of the show’s title: she is from both “aquí” — here — and “allá” — there. 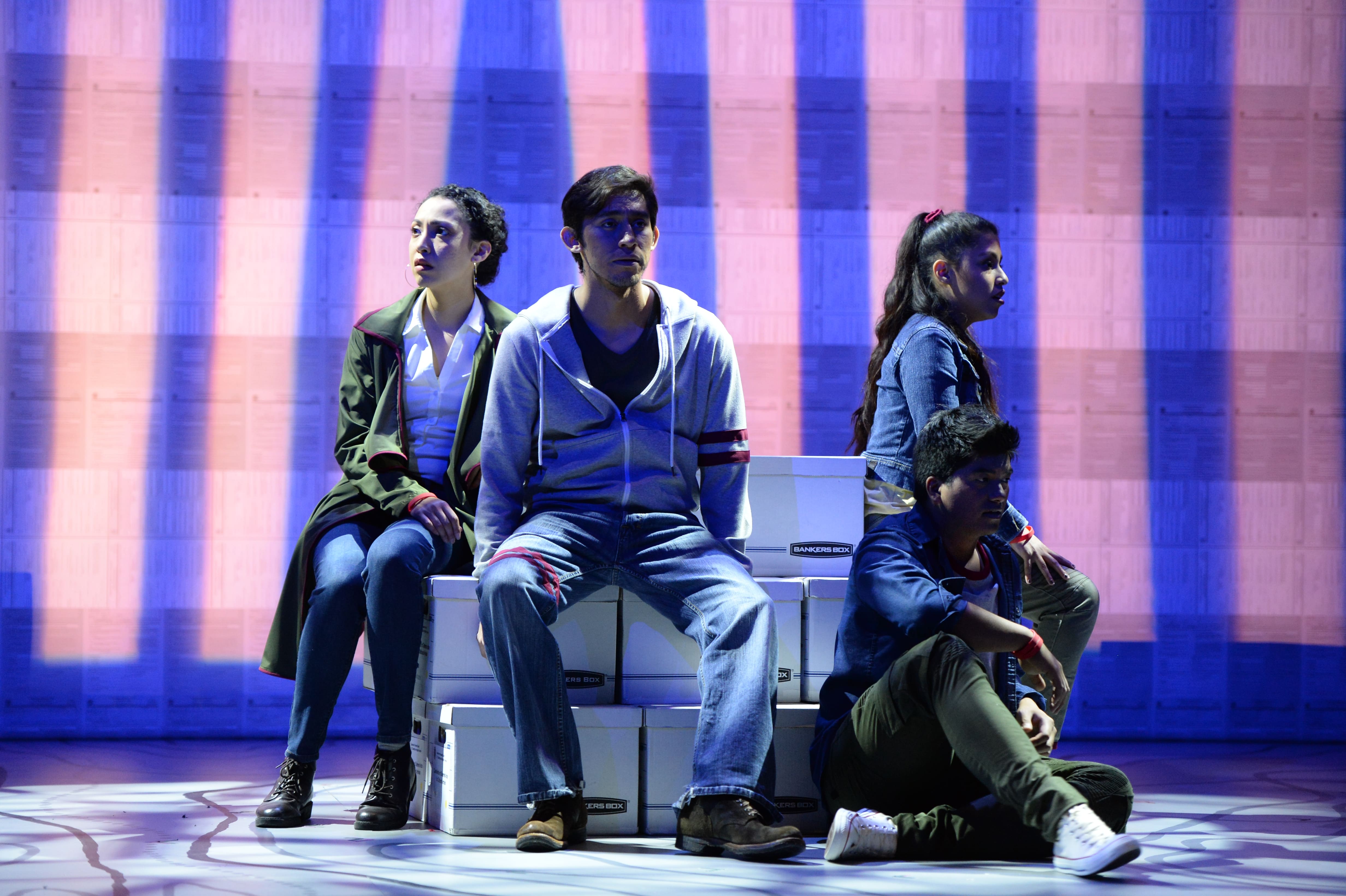 Each narrative is embedded within a greater dialogue about the issues and fears surrounding the program, pronounced most bluntly in Mark Young’s portrayal of Francisco, a Dreamer who worries that U.S. Immigrations and Customs Enforcement will deport him after receiving his personal information. Although there is certainly a story element to it, it is not done in a way that is convenient for its audience. It is not presented in a way that allows viewers to get comfortably lost in a fictitious world of the cast’s construction, but that’s the point.

They aren’t just supposed to be characters. They are real people living real lives in fear after being promised temporary legal status if they abide by strict guidelines.

“Dreamers” appears to have learned from its predecessor, “Woke!: A Revolutionary Cabaret,” in that it offers a clearer resolution to its issues.

There are periodic breaks in the fourth wall during the hour-long production that serve as grounding points to remind audiences that this isn’t just a play, but the real life experiences and fears of undocumented citizens. It blends the speeches of former President Barack Obama, the announcement of DACA’s repeal by Attorney General Jeff Sessions and the panel with Rep. Alan Lowenthal into the show. “Dreamers” plays upon metaphors of light and shadow and constantly reminds its audience that this is not simply a “show” but a reflection of reality.

“Dreamers” is real and it is happening. The cast and production team seem to hope that the audience will no longer look away. While there may not be a clear, neat solution yet, “Dreamers” challenges its audience to stand up and use their voices and their votes to speak up for the Americans who cannot.

As deeply personal as it is political, the play is an outstretched hand to all the Dreamers out there, of which nearly a thousand attend Cal State Long Beach. It turns the questions initially posed to Dreamers — What have you brought with you? What are you leaving behind and, once you leave, what will you take back with you? — around and makes it about the audience’s own beliefs and misconceptions.

“Dreamers: Aquí y Allá” will be playing through Feb. 25 with shows at 8 p.m. on Tuesday, Wednesday, Friday and Saturday in the Studio Theatre, located in the Theater Arts building. Matinees are at 2 p.m. on Saturday and Sunday. A special performance with the show’s collaborators and community members will be held at 7 p.m. on Thursday. Tickets for students and faculty are $15; tickets for the general public are $20. Tickets can be purchased at the box office or online.