The Art of Resistance

It’s a unique kind of exhaustion.

Headlines on both a national and global scale reflect dispiriting news. Increased tensions between the United States and North Korea. The investigation of former National Security Adviser Michael Flynn and resignation of several members of the president’s cabinet. The rise of the #MeToo movement and the French response, #PasMoi. The mass shootings in Las Vegas and Sutherland Springs, Texas. Terrorism in New York, London, Sweden and Spain. The aftermath of Hurricanes Harvey, Irma and Maria. White nationalist rallies in Charlottesville, Virginia.

Last year was rough, but, now more than ever, people must pay attention, call congresspeople and use their privilege — citizenship status, economic status, race, gender, time — to amplify those that need to be heard the most. The internet has disseminated people’s personal stories and rallied together isolated, marginalized people to find community in one another even if they were thousands of miles apart.

But does it mean anything if no one is listening?

In 2017, Pew Research Center reported that 86 percent of Americans feel there is “strong” conflict between Democrats and Republicans, much higher than the minimal political polarization documented in 1994.

But if protests and rallies are too radical and petitions don’t “solve anything”, how else are we to be heard?

A study by the Roper Center at Cornell University reported that while most people disapproved of anti-war protests during the Vietnam War and the civil rights movement at the time they were happening, the movements are still reflected on positively in history books.

No change in history has been brought about without taking a stand.

President Donald Trump’s first year in office has inspired nearly 44 protests, not including the ones prior to his nomination and run for election. Each protest was a response to his decisions on issues like the Keystone Pipeline, women’s rights, the travel ban, repeal of the Affordable Care Act and the repeal of DACA.

But if protests and rallies are too radical and petitions don’t “solve anything”, how else are we to be heard? That is the question being asked by activists now.

Art removes an issue from its context and forces you to look at it for what it is, avoiding irrational discourse that focuses more on ridiculing a person’s character than their opinion.

“How are we to be heard?” is the same question resistance groups in Spain asked in 1937 after watching Guernica burn from bombings incited by the nationalist government. It’s the question Koreans asked while having their culture suppressed under Japanese occupation in the early 20th century. It’s the question asked by the LGBTQ community, dying from AIDS in the ‘80s while being ignored by the government and news outlets.

The LGBTQ community crafted the AIDS Memorial Quilt, now consisting of more than 48,000 panels and weighing in at around 54 tons, to commemorate lives lost to AIDS.

Artists resisted against the logic and aestheticism of capitalist society and supported the  anti-bourgeois in the Dadaist movement of the early 1910s. Animators protested the two world wars with “Brotherhood of Man” and “Peace on Earth.” Art also functioned as propaganda in the case of Rosie the Riveter, Uncle Sam and the Russian film “Battleship Potemkin.”

Resistance also finds itself in the dramatic arts.

Sophie Treadwell’s “Machinal” spoke against female discrimination and oppression; Naomi Iizuka’s “Polaroid Stories” commented on the plight of homeless teenagers and their isolation.

“Dreamers” began development last year after Jeff Janisheski, chair of the theatre arts department and Cal Rep’s artistic director, chose resistance against oppression as the theme for their upcoming season. A response to the post-election turmoil, the season will focus on other systemic issues, such as misogyny, racism and class division. 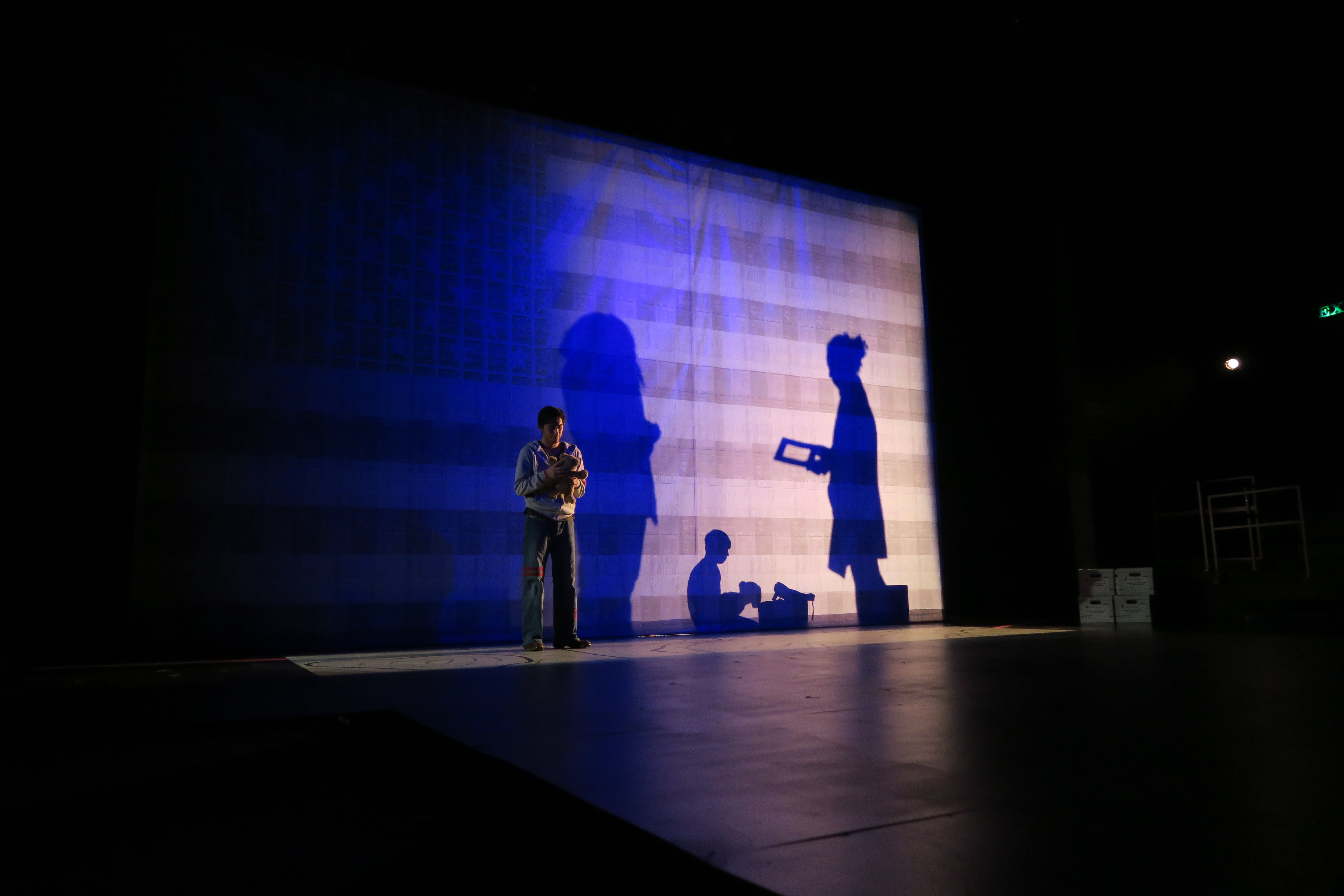 While the play explicitly addresses the Deferred Actions for Childhood Arrivals (DACA) policy, it was not originally a response to the program’s repeal last year.

“The rhetoric and the politics [around DACA] were happening and evolving and have been changing ever since [its initial conception],” Janisheski said. “But it was really the fact that [DACA] was such a story about America, about California and our students that it made me think, ‘This is a story we have to do.’”

Cal Rep partnered with the California-Mexico Studies Center, headed by Armando Vazquez-Ramos, to create “Dreamers.” The script was the team effort of co-directors Andrea Caban, Julie Granata Hunicutt and the show’s cast. Cal Rep traveled alongside a group of Dreamers who returned to visit their birthplaces in Mexico by way of DACA’s “advance parole,” a provision which allows recipients to travel and re-enter the country legally.

The trips began in the spring of 2014, with cast visiting in pairs before exploding into groups of 30 or more students. The final trip to Mexico was done through a partnership with El Colegio de la Frontera Norte, a prestigious Mexican university and think tank. As part of the trip, students were required to write an essay on their experiences abroad; it was these experiences that were used to create the show’s composite characters.

While focused on DACA students, the show poses the broader question, “Who do we call American, and who do we give that right to?”

“Dreamers” is part of “Devising Democracy,” a four-year project in which actors create democratic spaces where important issues can be addressed through theater.

Protests and rallies, while valiant efforts, seem to make no headway with their causes. The increasing polarization may make things worse. It may be easy to dismiss a show like “Dreamers.” What hasn’t already been said about DACA in the media, on the House and Senate floors, or in conversation?

What good does it actually accomplish? In an age of instant gratification, isn’t that always the question?

Erin Mee, an assistant arts professor at the Tisch School of the Arts at New York University, is on the side of theater and the arts.

Mee argues the theater can act as a mirror to society as was with the case of the “Theatre of the Oppressed,” which Mee explains is “a rehearsal for how to deal with a situation in which you are being oppressed.”

The Theatre of the Oppressed is a type of form theater invented by Augusto Boal, a Brazilian theater practitioner, that acts as a tool for exploring a collective struggle or issues.The Theater will take a play or parts of a play, then ask its audience to identify what they saw, who they saw being oppressed or how they were oppressed. It then requires the audience to become active participants in the show and step into a role, then work to resolve the issue in context.

The pieces demand its audience to empathize with the characters, but also to recognize that they are not characters so much as they are a mirror to society.

Mee believes people have the power to change systems they are unhappy with.

Mee adds that art, theater in particular, is unique in its approach to beginning these conversations because it focuses on experiences rather than facts and figures. She cites “Counting Sheep,” a play written about the Ukrainian Revolution, as an example.

“We got to know the characters in [“Counting Sheep”] and we became, for a few moments, Ukrainian,” Mee explained. “This profound act of identifying with another group of people, with a political situation, putting myself in their shoes for a while, seeing what it’s like to be them — that’s a way you get to experience something and I think you’re changed by your experiences.”

It is precisely what Cal Rep and “Devising Democracy” work to create: an experience.

“Dreamers: Aquí y Allá” humanizes DACA recipients, who account for around 1,000 students on campus and nearly 800,000 people nationwide, to educate people and provide a sense of belonging to its audience. It’s deeply political, challenging prevailing narratives of undocumented immigrants by telling the real-life stories of Dreamers who have only known the “here” — “aquí” — and the “there” — “allá” — as two separate entities, but are a part of them all the same.

“We say in the play that most people who are anti-immigrant don’t know any immigrants. And so the play allows someone to get to know immigrants,” Caban said.

Art forces individuals to set aside preconceived notions and prejudices to, as Mee puts it, “rehearse empathy.” It’s an inexplicable, vulnerable sensation, to willingly surrender yourself to the physical form of another person’s experiences, especially with something that is meant to appeal to one’s emotions rather than to their intellect.

The fact is: art might not solve the world’s problems overnight. Protests, rallies and speaking out might not “save the world,” but it’s a starting place for conversation, which is something we need desperately.