Tucked across the street from Knott’s Berry Farm sits a quiet, unassuming building.  Skeletal guards greet you as you approach the front doors, the first hint that The Cauldron: Spirits and Brews is unlike any other bar and restaurant around here. Inside, the dim interior is lit by soft lights sparkling throughout the room. A cauldron bubbles away at the fireplace as you are seated at your table. Spooky knickknacks and beautiful dark artwork cover the walls surrounding you. Lights twinkle above the bar as they illuminate the stained glass bats and crow skeletons that loom above the bartender as they prepare drinks. The grand bookcase beside the bar opens and you can catch a glimpse of a hidden room before it closes. 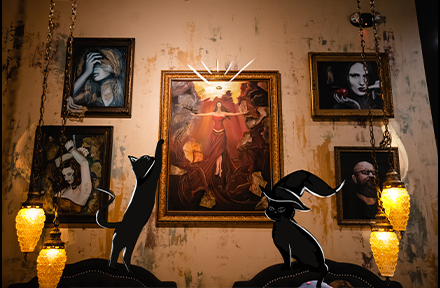 Cats taking in the the sights

The Cauldron: Spirits and Brews was opened by Lara Hanneman after a successful 23-year-long career as the Director of Entertainment for Knott’s Scary Farm. With little more than a dream and extensive entertainment experience, Hanneman made the leap and opened The Cauldron. While initially having a bit of a rough start, The Cauldron has since become a popular place for those looking to decompress with friends, network or have a nice date in a comfortable yet spooky atmosphere.

With little more than a dream and extensive entertainment experience, Hanneman made the leap and opened The Cauldron.

This witch themed bar and restaurant boasts a menu of French bistro inspired bites with spine tingling drinks. Everything from prosciutto wrapped shrimp to Croque Monsieur sliders and creme brulee is house made and based on recipes Hanneman had collected over her years of throwing parties. 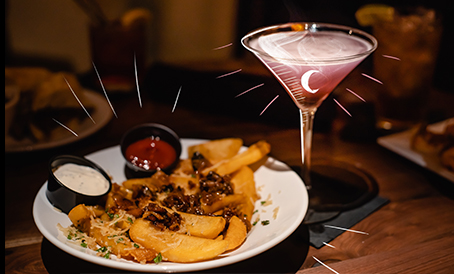 Vodka and grub at the Cauldron.

We started with their steak fries appetizer topped with garlic Parmesan and bacon jam along with their prosciutto wrapped shrimp. The drink we chose to accompany our food was the Knotty Kid, a swirl of boysenberry cotton candy topped with vodka and lemon. Our main course consisted of the French dip sliders and French onion soup, then we finished our meal with the espresso creme brulee. All of the food we sampled was delicious.

A group of regular patrons --Zara, Jacques, Terrie, Perri and Bobby-- have made The Cauldron a regular part of their weekly routine. They have been coming every Wednesday for the past one and a half years so religiously that they became friends with the whole staff and can practically recite the menu. They couldn’t emphasize enough how much they loved The Cauldron. The decor had been what originally drew them in but they kept coming back because they had become part of The Cauldron family.

Along with the customers, employees Nadine Sawalha, Chris Winsor and Staci echoed the same sentiments.

“Everybody's family here. You don't feel like you're fake when you come in [to work]. You can be yourself,” Staci, a server, said.

“It's like a mom and pop shop atmosphere, you know, so it's not corporate. I'm free to speak my own and dress as my own,” said Sawalha, another server at The Cauldron.

Sawalha went on to say how last year’s Christmas party had emphasized how close her and her coworkers had become, saying “it was just such a union between all my coworkers, like we were just so united that night.”

The sense of family shared between the employees was evident through our time there. Even with the normal downsides of rude customers and long shifts (especially during Knott’s Scary Farm) they all expressed their love for The Cauldron.

“Honestly, I can say this is one of the few jobs I've ever had that I actually enjoy coming to work every day. So it's not a job to me. It's fun,” said Winsor, a server and bartender.

Moving forward, Hanneman hopes to expand The Cauldron into the basement of the building as extra space for parties and the Halloween season crowds.

“Eventually I’d like to open more themed bars in different areas. Maybe not all The Cauldron but maybe jazz clubs, things like that that have a little twist and an immersive environment,” said Hanneman. 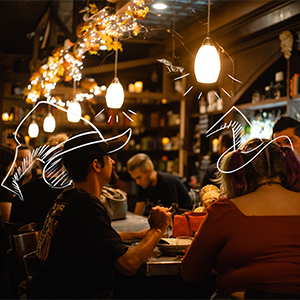 If you’re looking for a fun night out or just find yourself in the area, go and check out The Cauldron: Spirits and Brews. Whether it’s Halloween season or not, you’ll find friendly people, delicious food and a spooky vibe all year round.