The 21st Century in Retrospective

We have finally reached the second decade of the 21st century where, instead of zooming around the open sky in zero carbon emission vehicles, we are enlarging our carbon footprint every minute we sit in traffic on the 605. Although it may seem easier to dive into the reflecting pool of the shortcomings of humankind, there are still a few things worth patting ourselves on the back for. There is no denying we’ve done some good in the past two decades; the question then becomes how much have we managed to accomplish with all we’ve been given?

Assessing the pessimistic (though some may call it realistic) aspect of events, we were supposed to have accomplished so much more by 2020 — and the U.S. was supposed to be at the forefront of that change. Yet we have found ourselves with Donald Trump as our impeached president, high homelessness rates in major metropolitan cities and mass shootings at an all-time high. At the end of last year, the Program for International Student Assessment released its results, revealing disparities among U.S. students on local, national and global levels.

On an international scale, the U.S. saw a major shift in its foreign policy during this decade, moving from containing communism to combating terrorism. Facebook grows more nefarious with every update and Google continues to sow the seeds of distrust deeper into our private lives. Climate change is well on its way to hitting the roof and, when it does, not even Greta Thunberg’s activism nor Elon Musk’s ambitions to colonize Mars will save us.

In short, the world was supposed to be on its way towards progressivism, freedom and equality. Though not all of these ambitions have been exactly short-sighted, how much of it has actually backfired on humanity?

Nicholas Kristof, an opinion columnist for the New York Times, recently wrote a piece titled, “This Has Been the Best Year Ever.” He gives escaping extreme poverty, reduction in child mortality and increase in literacy as three main reasons why “for humanity over all, life just keeps getting better.”

“As recently as 1981, 42 percent of the planet’s population endured ‘extreme poverty,’ defined by the United Nations as living on less than about $2 a day,” Kristof writes. “That portion has plunged to less than 10 percent of the world’s population now.” Hurray for the children and increased literacy rates, but it’s still worth noting that, although it’s great that the general population living in poverty has decreased significantly, it’s not clear if this is merely due to billionaires becoming increasingly richer and the poor remaining stagnant.

Perhaps the reason why dwelling on the bad seems to be automatically effortless is because the situations seem truly dire. Cybercrime, climate change, poverty, corrupt politicians, terrorism and more? Although it may appear we are absolutely fucked, we’ve achieved some admirable things in this century too. 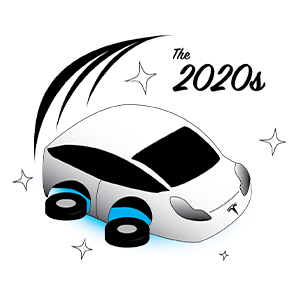 For all of the controversies and incidents that have indubiously become more apparent in recent years, technology has overall made life more efficient and enjoyable. Public consumers became acquainted with WiFi, Apple and Bluetooth. Tesla Motors began developing its first electric vehicle in 2004 and, with improvements in battery technologies, the automobile industry has only been increasing its manufacturing of clean energy vehicles. Estonia, a country in Northern Europe, has become a “digital republic” in which citizens have access to public services, from voting to health care, “linked across one platform, wiring up the nation.” What’s more, since 2014, anyone can apply for e-residency and even have digital access to the country’s services from their own home.

Some positive momentum has even begun to pick up in Hollywood and the entertainment industry as well. The Oscars have become — just slightly — less white and male, and the #MeToo movement empowered women to speak up and deliver justice against their abusers. Other movements such as Black Lives Matter, the yellow vests, and the Hong Kong protests exhibited the voices of those disenchanted with their countries’ racial, social, economic and political states and their refusal to let their governments slide on these issues. Unfortunately, some displays of violence have been resorted to in order to make people pay attention and take action.

If there is one thing that the last two decades have taught us, it’s that so much can happen in such a short amount of time. Given all the follies we’ve accumulated over the last twenty years, it is sufficient to say that there is substantial room for improvement. Not only that, but we have the resources to make efficient, beneficial and progressive change. As Estonia’s national digital advisor, Marten Kaevats, told the New Yorker in 2017: “‘It’s about the mind-set. It’s about the culture. It’s about the human relations — what it enables us to do.’”

In summation, we can either live in distrust and squander, hiding behind the stickers covering our laptop cameras and remaining discouraged to vote, or we can use the tools we’ve produced ourselves to rise above and strive to be better in this new decade of the twenty-first century.