Amazon Takes Over the Holidays

Story and Illustrations by Tara Thomas

Amazon, what started out as a simple online bookstore has morphed into so much more in it’s relatively short 25-year history. Now with free delivery for Prime members, one-day shipping and a stock of every product you could ever desire, it’s no surprise that Amazon has taken over the holiday season. The process is convenient, efficient and affordable. But is that really what the season is all about? Over the years Amazon has undeniably made an impact on our holiday, but it's hard to say whether it’s for better or worse.

Christmas lists that were once hastily scrawled on notebook paper have become carefully curated Amazon wishlists created months in advance for friends and family to “add to the cart.” Hunting through closets for hidden gifts becomes hacking into your parents accounts to see what they’ve ordered. Santa’s elf on the shelf is now Jeff Bezos listening into any Alexa device — except now it doesn’t matter how naughty or nice you are, so long as you buy something. Ripping open festive wrapping paper and shoddy Scotch tape has changed to untying the ribbon on generic, velvety blue bags with a typed-out note that reads “From Santa.” Or, when deliveries come in a little later than expected, the ritual involves carving through khaki-colored packing tape with a kitchen knife to get to the bubble-wrapped prize inside. It’s possible that all these changes are just a consequence of growing up and losing the magic of the season, but Amazon has made more changes than just inside the home.

Another major theme of the season is family. A few years ago, my mother rented a car and six of us road tripped to Arizona, stopping by Yosemite, Grand Canyon and the Hoover Dam. It was obviously freezing, especially around the Grand Canyon. However, braving the elements with my family became a sort of bonding experience. But now Amazon might infiltrate that space too. According to the L.A. Times, in November of this year the Trump administration announced plans to update National Parks with “expanded Wi-Fi service, food trucks and even Amazon deliveries at tourist camp sites.” Imagine my outdoor enthusiast mother’s dismay when she discovered that Amazon Prime trucks could infiltrate one of her favorite places to get away.

Sure, fast shipping is a great benefit to the internet age consumer, but we also need to consider the people holding up the brunt of this system: low-wage workers. A new holiday commercial for Amazon shows people making their way home for the holidays with a little sing-along of “Everybody Needs Somebody to Love” by the Blues Brothers. The feel-good video features a variety of individuals of different ages, races, abilities and sexualities taking advantage of Amazon services, highlighting how Amazon has become a household name for an extremely diverse target market. The delivery driver makes her stops, hand delivering the packages with a smile — as if the actual process doesn’t involve throwing the boxes on the doorstep and booking it back to the truck to keep up with the busiest shopping time of the season. Last minute holiday shoppers are very appreciative that Amazon has the capacity to support their habits of procrastination but I can only imagine the reaction they’ll give the delivery driver the day after Christmas. 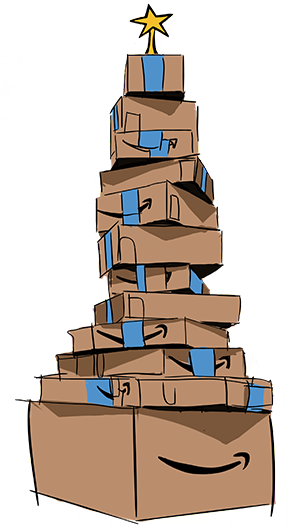 By the end of the commercial, the sun has gone down and the Amazon driver makes it home to greet her family for what is presumably Christmas night. This scene probably elicited more sadness for me than anything and I doubt that’s what the advertisers were intending. Trying to make the long-hour, low-wage workers into “heroes” without giving them the benefits they deserve is a cheap trick that companies leverage to reduce employee backlash. Last summer, an article in Time Magazine described what it’s really like to work in the Amazon warehouses. The author, Emily Guendelsberger, recalled the physical and mental stress that arose when “every single thing [she] did was monitored and timed.” There was a reason for the strikes during Amazon’s coveted “Prime Day” last year, and the reality is that people don’t like to be held to the standards of robots.

Speaking of robots, another one of Amazon’s inventions has become a cause for security concerns. “He sees you when you’re sleeping, he knows when you’re awake” really hits home when it comes to Amazon’s Alexa. Using search data and voice recordings, Amazon can now personalize it’s website to fulfill your every desire or sell you products related to something you mentioned once in conversation. Amazon then uses that knowledge to make billions in advertising money. The company has even released a “curated” holiday gift guide where the qualifications are how much money companies will pay for a spot. With the innocent intention of making shopping easier and more customized for the consumer, Amazon is able to control the bulk of buying behaviour of parents during the holiday season.

But parents are not the only offenders in this one-stop-shop mentality. Looking back at my Amazon history, I can mark the occasion of my first purchase in 2008. Unsurprisingly, it was a book. I’ve made various purchases since then, but the first year I Christmas shopped on Amazon was in 2013. Since then, I have continued to use it as a crutch because crowded malls during the holiday season give me acute anxiety. The dilemma is, despite the aforementioned negativity about Amazon taking over the world, it’s happening because Amazon has a clear competitive advantage.

I could ask people to hand make gifts or support local business this holiday season, but I really don’t think that’s going to fix the situation. Simply asking people to reject Amazon no longer seems like a supportable argument because the reality is that Amazon is winning in this capitalist game when it comes to customer satisfaction. The only remaining options are for the government to break Amazon’s monopoly or for other companies to step up to create the same quality services — but with humanitarian practices. 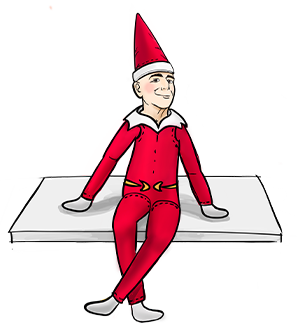