“Every dog that’s here is beautiful,” said the event’s founder Justin Rudd, before the first dogs were strutting on the red carpet of the 2020 Long Beach Bulldog Beauty Contest at the Pacific Marine Stadium. Justin Rudd’s appeasing words were definitely meant to comfort the two-legged owners in case their dog does not win. The four-legged attendants didn’t seem to realize that they were competing against each other and that they are about to be judged based on the length of their legs or the shape of their butt. They simply enjoyed the attention of all those people and the company of their fellow bulldogs.

Some dogs came from northern California, Nevada, Arizona or even Montana. Whoever thought that all bulldogs look the same was proven otherwise: they differ in fur color, body types and faces, but most importantly in their attitude. The latter partly depends on how the owners present their bulldogs. One bulldog was wearing a tasteful Gucci collar, another one carried a gold necklace. Many dogs were dressed up, for example, with a pink tutu. 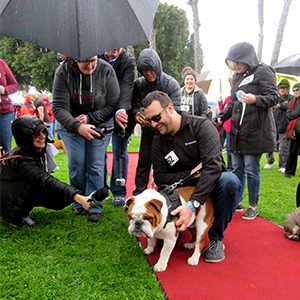 Yadira Hernandez went even further. She and her English Bulldog Chimichanga were competing in partner look - they both wore the Kobe Bryant jerseys. “What better way to come into the competition than with a mamba mentality?” Hernandez said.

The two come to Long Beach every year and Chimichanga has already won a few competitions. Nothing less than winning is the goal for this year and Chimichanga is competing for the title of Best Senior Dog. “He had cancer three years ago. He has a fighting mentality. He’s always trying to win,” Hernandez said.

While old-timer Chimichanga was pretty chill, the young Bulldog Bruce was really excited. After all, it is his first beauty pageant. On the red carpet he definitely stood out with his wild temperament - he was chasing the red balloons at the edge of the catwalk. Unlike Chimichanga, Bruce was not dressed up. “We show off his natural fur,” the owner Kate Bossilman said, although they also bathed him and cut his nails the day before the big competition.

For the contest, all the bulldogs were walking with their owner around the red carpet where they got a lot of cuddles from the audience. In a final round of 20 bulldogs, the judges, all Long Beach pageant winners, finally decide which one was the most beautiful. They were not only considering first impressions and figure, but also the charm and personality of the dog, while kindly ignoring the drooling. 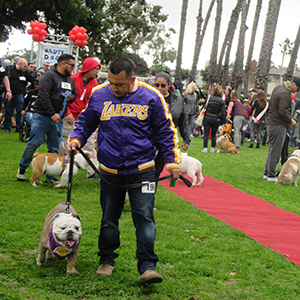 Unfortunately, it started raining before the judges could call a winner. The appearance of the dogs was hardly influenced by the water because there was no make-up, proper clothing or complex hairstyle to deal with. But although the dogs did not care about the rain, their human owners did which resulted in the award ceremony ending short.

There were some smaller competitions after the big English Bulldog Beauty Contest, which allowed other breeds. There were some really interesting categories like Best Smile or Best Tail.  Around noon the big French Bulldog Beauty Contest took place. At this time most of the audience already left due to the rain. The remaining contestants gathered together under the trees. People put towels and blankets on the dogs to keep them warm and dry. One man had a special umbrella for his small bulldog, but in the end, both owners and dogs were soaked – well except maybe this one Bulldog that was sitting in his own stroller.

The most beautiful bulldog of Long Beach was quietly awarded a ribbon and a bounty of pet food and supplies. After a short photo session, he headed home without giving a proper statement to his victory. Bruce and Chimichanga both missed first place.