In his third season mentoring women’s basketball at the Beach, head coach Jeff Cammon is excited to work with a team so passionate about the sport. The team, he said, still has a lot to learn but show a lot of promise with their dedication to the sport as well as to one another.

“There's so much more you can get from [basketball] and gain from it than just winning games and I think having dialogue and really listening to them and getting their perspective is important,” Cammon said. “It allows us to build a relationship that allows me to understand them on a deeper level — who they are as women and what they really want out of this experience.”

Cammon said it’s humbling to be in a position where he can impact their lives in a positive way. His teachings emphasize that any losses are just hurdles that have to be overcome.

“You know you’re going to have good days and bad days but it’s how you deal with adversity when it comes — those are things we try to instill in our young ladies,” Cammon said. “That's part of competing, that's part of the process. You definitely feel disappointed, you know, you're frustrated in some ways, but get up and dust yourself off and get moving, you know, it's all about the response.”

Cammon’s goal is to not only to coach the players in basketball, but also to help develop their individual interests in life. He hopes that the women will be able to succeed in their future, using what they’ve learned on the court and applying it to other scenarios.

“I hope they take away life skills that they can use once they leave here,” Cammon said. “It's gonna be tough, you know, there has to be identity and not identity that people want for them, but what they want for themselves.” 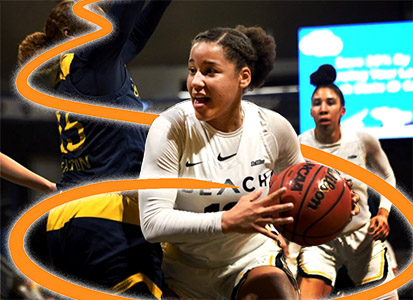 Sophomore Justina King, who plays guard and was named the 2018-2019 Big West Conference Freshman of the Year, said being part of basketball was “kind of inevitable” as her mother, father and brother all played. The education major, who leads in assists and is second in scoring, attributes her success and skills to her father.

“My dad pretty much taught me the game within the game,” King said. “We would take pennies and use them as players and make plays; we would make games out of it and who could make a better play. It was a way to connect with my dad and it was our happy place.”

The team’s connection that they share during a game comes from all the time they spend together, and it translates on the court to the type of energy and excitement they have for one another.

“Some teams don't even like each other and don't speak to each other outside of basketball,” King said. “Whereas we are together all the time after practice; we would be like, ‘Okay, so where are we going after this?’ We're very fortunate for that because again, not all programs have what we do and you don't get that with people that don't like each other. We're just genuinely happy for each other because we just genuinely love each other.”

King said her competitive spirit is what gives her motivation and her teammates know to give her space after a game if they suffered a loss. However, seeing her teammates thrive brings her a lot of joy and every game is a learning experience.

“Winning is great, but sometimes it masks the mistakes you make, because you say ‘Oh, it's okay because we won,’ but when you lose, it highlights all the little things that you maybe didn't even realize before,” King said. 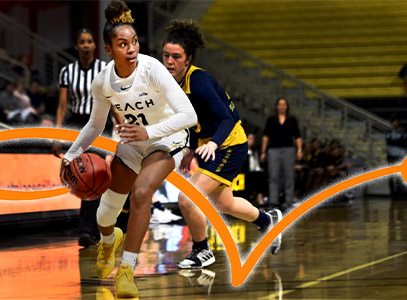 Junior Shanaijah Davison, who plays guard, began her basketball journey very early on. For her third birthday, Davison remembers her grandfather buying the kiddy court she picked out at Toys R Us and since then, it’s been a part of her life. Davison is majoring in American studies and, although she spent the off-season rehabbing an injury, she is the leading scorer.

“Basketball has pretty much been my whole world since I was younger and I'm very competitive,” Davison said. “I hope to keep playing basketball; going pro has been my dream since I was a kid.”

Davison shared that the team at the Beach really sets itself apart from any other league and credits her coaches for being an integral part of her growth, not only as a player, but also as an individual.

“I hear a bunch of stories of people not having a good relationship with their coaches but we've never had any problems with that. Our coaches really care about us,” Davison said. “It's not always just about basketball — they want us to be independent strong women. It's just not a business here and they actually care.” 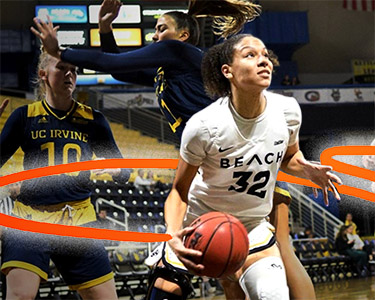 Redshirt senior Aaryon Green who plays forward began her basketball journey at her local YMCA when she was six. From there, she made lifelong friends in the sport. Green graduated with a bachelor’s in communications in 2019 and is pursuing a master’s in sports management.

“Basketball is just something we do that we love. It’s like a job, but not really a job,” Green said. “We all have our bad days, we all have our good days, but we're all there together. It's always a good memory.”

As a senior, this would be her last season and she doesn’t plan to continue competing in the future. However, the relationships she’s built through basketball have been an important part of her life and she wants to sustain that by continuing to work in sports.

“I want to do community outreach stuff in sports. That's something I’d like to do and just being able to get outdoors — I don't want to sit behind a desk,” Green said.

Green made her debut with the Beach in the 2017-2018 season after missing two full seasons due to injuries. This hiatus taught her to learn from every mishap and to continue to give her all in the future.

“My injuries, it's made me learn to be more patient and positive about games — the game has already happened, but we can learn from it and find things we can fix in the future,” Green said. “There's a lot of people that want to be in this spot, but you worked hard enough to be here and you did all the things you could and were granted this spot and knowing that empowers me.” 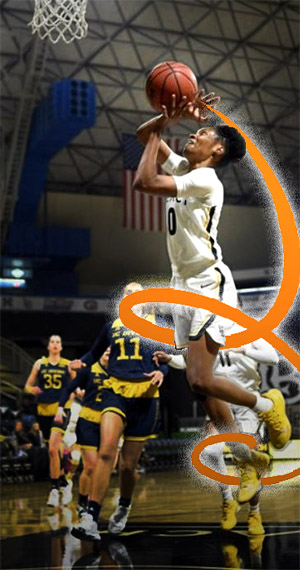 Redshirt Sophomore and psychology major Ma’qhi Berry plays guard and is leading the team in steals. She started playing basketball in the second grade, when she joined a local league and was one of the few girls on that team.

“When I have those days where I'm hurting or I don't want to get up, I think about how this — this is my love. This is my passion. I'm here,” Berry said. “It doesn't matter about my personal feelings or however I feel that day — I'm like, this is why I'm doing this. This is something that overpowers everything, no matter if I'm feeling tired or whatever the case may be.”

Berry plans to stick with basketball as far as it will take her and would like to showcase her abilities overseas in other countries. Berry attributes the game to helping her grow as a person and learning to bounce back from difficult situations.

“I think it's made me resilient and able to face anything I've come across in life, like if I have a problem outside of basketball or any adversity that I’m facing,” Berry said.

From her time on the court and in practice, Berry picked up life lessons from her teammates and her coaches. It’s taught her to take time and let go after losses and realize that there will always be another chance to do better.

“Being in this position empowers me because a lot of people say we can't do it, especially as a woman,” Berry said. “Being able to prove people wrong and going out there — being able to do the same things that a male can do, I think that empowers me. Just knowing ‘I can do this.’ It doesn't matter what gender I am, I’m going to go out there and have fun.”