The Corporate Takeover of Public Education

Earlier this summer, Forbes published an article which suggested that Amazon should replace libraries and received a substantial amount of backlash for it. The author, Panos Mourdoukoutas, a professor of economics at Long Island University Post, substantiated that libraries “don’t have the same value they used to.” His solution: Amazon should offer to create bookstores in places where libraries opt to shut down.

He argues that public libraries are too costly for taxpayers and that Starbucks and other establishments have eradicated the need for public spaces with free book rentals and Wi-Fi access. The article is full of contradictions, such as Mourdoukoutas’ claim that “people have started using their loyalty card at Starbucks more than they use their library card.”

Forbes has since removed the link and when readers try to access the page, they receive a message notifying them of a “404 ERROR“.

The backbone of Mourdoukoutas’ argument is that public libraries are wastelands of ineffectiveness that bleed out the pockets of the taxpayers. Amid online backlash, Mourdoukoutas doubles down, tweeting, “Let me clarify something. Local libraries aren’t free. Homeowners must pay a local library tax. My bill is $495/year.”

Several economists have debunked this claim, including Richard Auxier, a researcher at the Tax Policy Center. Auxier says that if all funding for public libraries were divided among tax-paying Americans, each individual would receive about $36.

The difference between a library and a bookstore is just that: one is a service to all members of the public while the other is a for-profit business that sells books to consumers. Additionally, people aren’t required to buy a cup of coffee in order to use the library.

Among those most affected by this change would undoubtedly be low-income communities and those who cannot afford books outside of the classroom or their own computer. 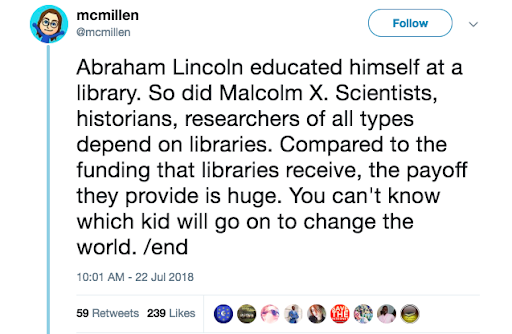 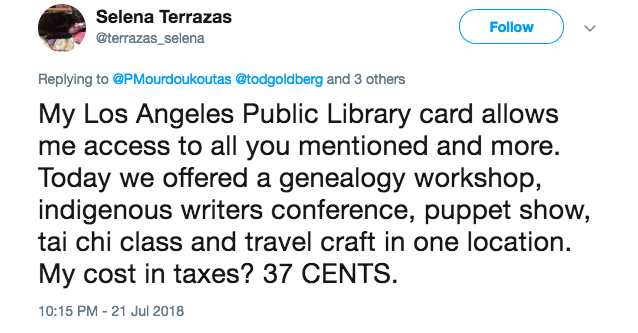 Libraries are more than just physical buildings where you can rent books and videos; they are an inclusive, nationwide entity that provides services to everyone. No one is denied access to the library whether you’re rich, poor, young, old, disabled, incarcerated, liberal, conservative, etc. That is an admirable quality that exists in increasingly fewer institutions, especially as education continues to become privatized.

Aside from access to resources alone, a private corporation could never match the services provided at public libraries. Libraries serve as safe spaces for people of all ages and socioeconomic status.

As college students, this proposal may become tangible policy over several generations if we aren’t paying attention. Take a minute to deliberate about the price of education today; if corporations continue to monopolize public spaces set aside for education, how might this affect our public schools and even higher education in the future? How might this affect textbook prices and supplies? 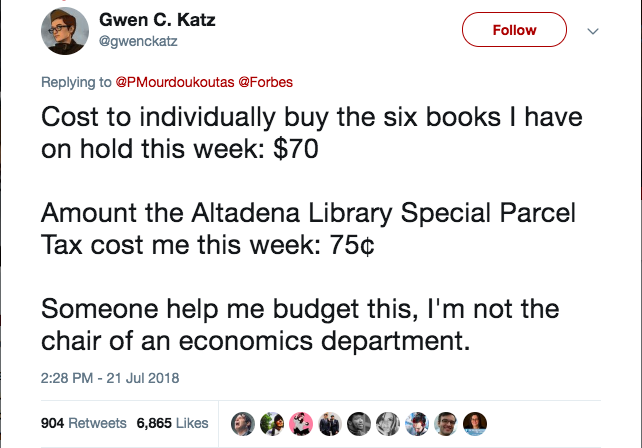 This is an obvious jab to Mourdoukoutas’ half-baked idea as to how to effectively save taxpayer money.

Perhaps our liberal studies majors and those going into teaching ought to be the most concerned: it’s no secret that teachers across the country, especially those employed in public school districts, are shamefully underpaid and often use personal funds to buy supplies for their classrooms.

The issue of shutting down libraries to implement Amazon stores is only one example, but over time we will likely see many more appeals to further privatize education for the sake of the upper middle class citizens’ tax dollars.

However, instead of a passive discouragement, this should be looked at as a call to action. By paying attention, getting involved and advocating for children who are disadvantaged, we can ensure a more secure future for many generations to come.