When most people think of Korean culture, they think of Korean pop artists like BTS blowing up the charts or chowing down Bulgogi at their favorite Korean barbecue place. And while attending K-con is a way to delve into a variety of cultural elements, it is not the end all be all and cannot truly capture the essence of how diverse this culture can really be. I discovered this for myself the year I went. The cultural aspects had been lost along the way, and the commercialization of the event ruined the experience for me.

This summer, I took an internship at a Korean American non-profit organization and had the opportunity to experience Korean culture in a completely different setting. I believe that this program has allowed me to understand multiple narratives and in turn, gain diverse perspectives of the Korean community holistically.

I have to say, though, that my favorite part of the internship was learning about the history of an old Korean folk tradition known as Pungmul. This tradition derives from farming culture, where drumming was used to raise the spirits of the workers. It is mirrors the repetition of farming with a repetitive momentum given to the instrument. The performances require all members to participate and creates a community through music. 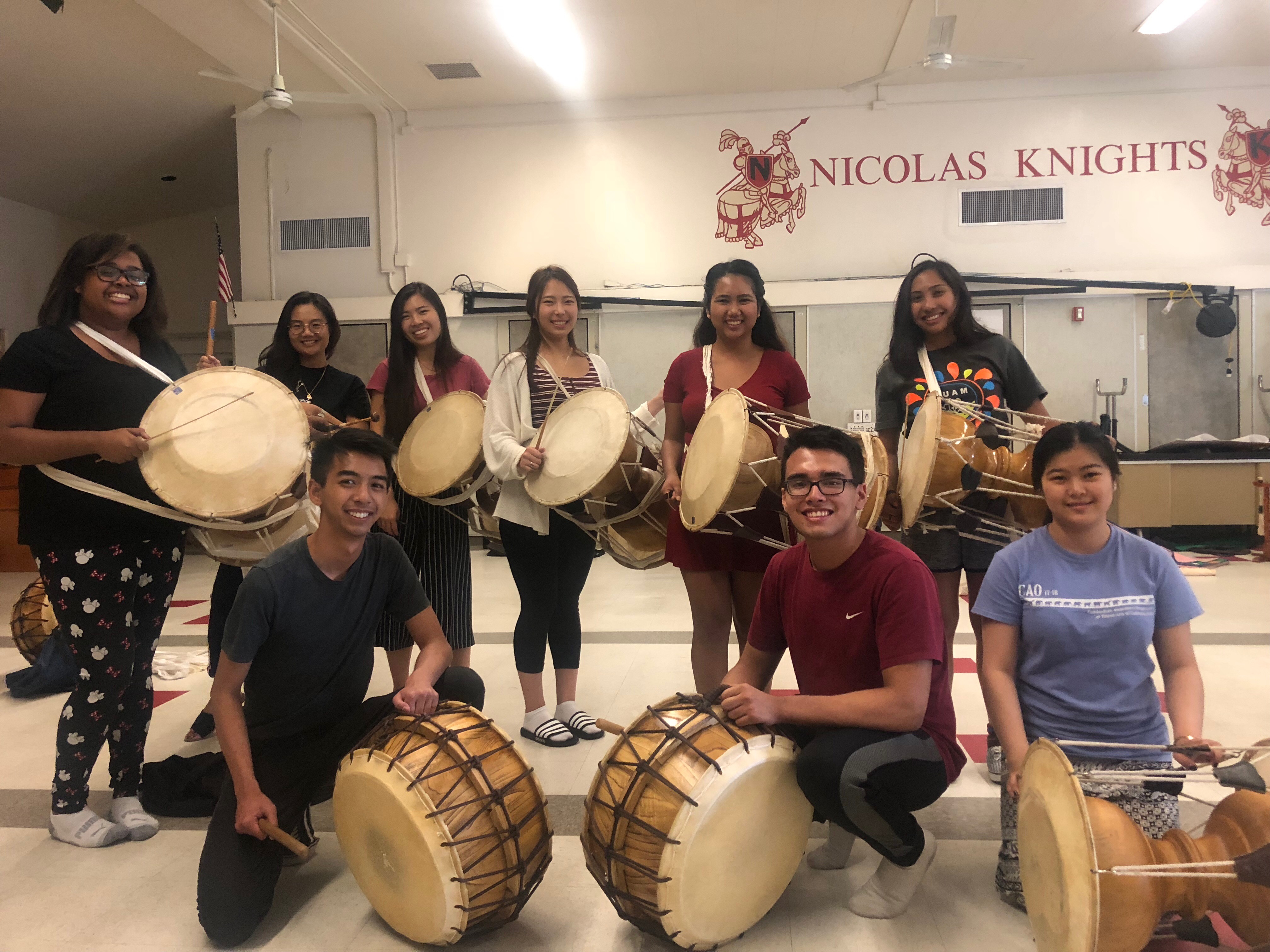 After learning about Pungmul, we were given the chance to participate by learning how to play Korean instruments like Janggu, Puk, and Kkenggari, how to sing and chant in Korean, and how to dance and twirl with a drum strapped to my back. This was very new to me, especially being someone who has no prior knowledge of percussion instruments. I have a vague understanding of how to play violin, ukulele, and piano. But, these instruments are all based in music theory so drumming became a whole new experience in itself.

I really felt like a beginner going into the lesson because I did not even know how to hold the Janggu or how to strike the two-sided drum. And without notes to memorize, it became apparent to me that I had to let the drum lead me. Drumming is a very impulsive stimulus, it makes your heart beat loud in your chest, like being seated up close at your favorite concert venue. It is also very addicting, I kept wanting to play no matter how much my hands were hurting after six to eight hour practice sessions. There was a ton of multi-tasking that was happening, but to my surprise I caught on quickly. I was extremely afraid to hit the drum hard and be loud with it at first, especially because I am used to making softer, more meticulous movements. But the more I played, the stronger I felt and the more I fell in love with it.

“I love the sense of community that it brings.” –Nara Kim

In just took two weeks of drumming lessons, I learned so much! It was a rewarding experience and cultural exchange, especially watching a strong Korean woman lead our group. The instructor for the group was Nara Kim, an Asian American activist that teaches lessons at her alma mater, USC. She first learned how to play from a club, Haneulsori that she described “became a family and an avenue to learn more about [her] Korean roots as well as a way to make friends with the other schools like UCI and UCLA.” After graduating, she was able to utilize Pungmul as a political tool at marches and rallies and create a sense of community. I was inspired by her experience with Korean drumming, especially because this instrument typically exists in more male-dominated spaces and it is rare to have a female instructor. She reflected that “being a woman that is helping to teach Pungmul feels empowering!” 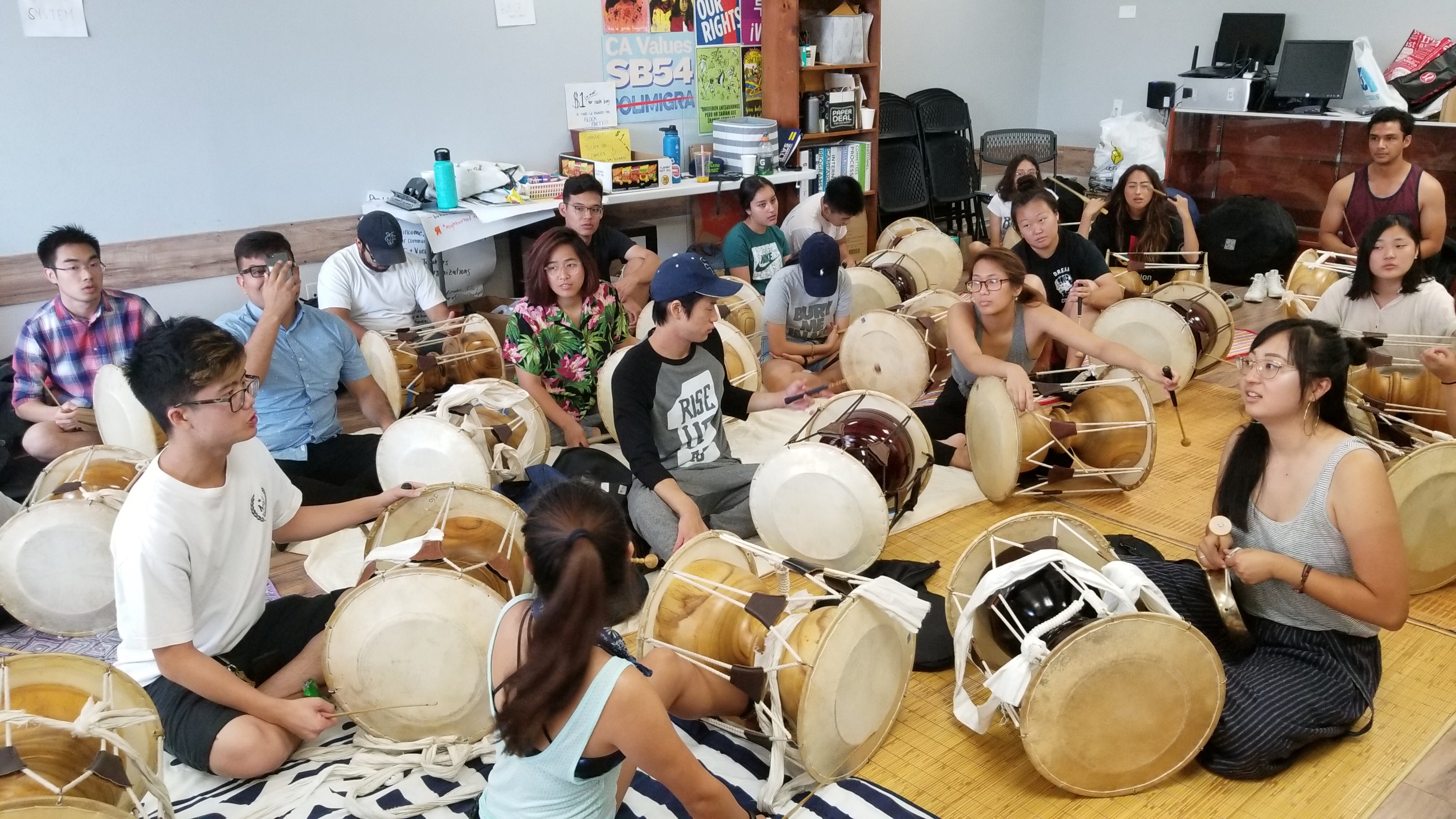 Nara’s story of self is also empowering to me. I believe that drumming is not only a great way to blow off steam, but a physical way to take up space. Taking up space is something that is hard to do, especially as a woman when we are so aware of the space that we are given and how we navigate through the world. Growing up, I used to not be too confident in myself and struggled to be assertive. I was aware of every movement I made and limited the space I took up in public spaces and conversations. But, when I was drumming, I felt so strong being able to take up space in constructive ways and even lead the group at one point. I also had the opportunity to challenge the misogyny that exists in our culture and build community with my coworkers and connect more to them. Without talking, we were able to connect to each other and harmonize, drumming to the same beat. I want to continue to do cultural exchanges and learn about other people’s narratives more authentically like I did in this way. And I hope people have the opportunity to do the same.