A cast of talented veteran actors and actresses shine, but get overshadowed by the recycled premise of every spy film ever made.

This particular interpretation by Elizabeth Banks stars actresses Kristen Stewart, Naomi Scott, and Ella Balinski as the angels as they work together to try to fight  an evil corporation and a spy within from selling a device on the black market that will ultimately kill millions of people, but ultimately make them a lot of money. So, basically Catwoman only with technology instead of makeup.

You know how when you jump from a high area, thinking you’re a cat, you’ll land on your feet and not hurt anything? That’s what I imagine the people making this movie predicted would happen. 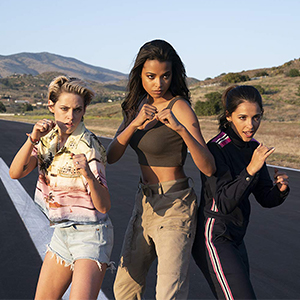 The brilliant performances and directing job done by Banks, unfortunately gets overshadowed by the basic premise, which reads like a million other spy films that preceded it: A device is manufactured by a billion dollar company headed by a pretty boy in a suit and is intended to be something that changes humanity for the better, – in this case providing the whole world with clean, free power. As it turns out, that device is capable of great harm according to various tests performed by its lead programmer, who is portrayed by Naomi Scott and who eventually becomes one of the Angels.

Kristen Stewart, however, was the greatest shock of all. Her character in this film is nothing like anything she has done before, portraying a character that has some life and spirit, and it shows when she shotguns a can of whoopass whenever she is on screen.

Overall, if you have seen one spy film, you’ve probably seen this one. But I had fun, so I’ll give it a B-.