Margot Robbie’s Harley Quinn gets the attention she deserves in the latest DC movie “Harley Quinn: Birds of Prey,” or “Birds of Prey” for short. Overall, this movie was a riot to watch because of the strong personalities, eccentric costumes and fantastic sets. Although the movie did nothing groundbreaking as far as plot, the message of female empowerment is clear and it sets the foundation for other films to come featuring our entertaining antihero and her newfound friends.

This review will include some plot spoilers, so be warned. For those of you who did not see “Suicide Squad” in 2016, Harley Quinn was busted out of prison by the Joker at the end of the movie, but somewhere between then and now their realtionship must have gone sour. As a result, “Birds of Prey” seems to be about Harley Quinn finding freedom from her past relationship. Unfortunately, breaking up with the powerful Joker also means a loss of immunity in the dark and dangerous Gotham City. Now, she has to watch her back around every corner.

The plot is humorously narrated by Harley Quinn in her endearing, Brooklyn-esque accent. In a similar fashion to “Suicide Squad,” the audience gets filled in on the backstories of our quintessential characters as well as quirky freeze frames to describe new villians and the various reasons why they hate Harley. The all-female team is slowly introduced, but consists of a diverse array of characters including a jaded detective Renee Montoya, a vengeful assassin called the Huntress, a bar singer turned getaway driver Black Canary, and a young pickpocket named Cassandra Cain. 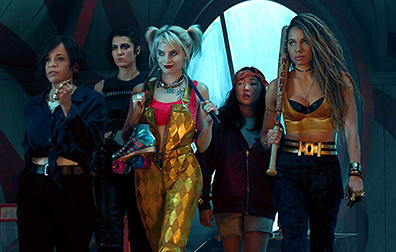 All of their paths intertwine in the hunt for a family heirloom — a 30 karat diamond — that holds the key to a fortune. The primary threat is the extravagant Black Mask and his face-slicing assistant Victor Zsasz. The Black Mask, also known as Roman Sionis, is a disturbing villain who has a penchant for getting his way, no matter the cost. Some of his scenes are downright gruesome, but leave Black Mask completely unfazed. Not only is he sociopathic and evil, but he is a man of money and power, making him one to be feared. Yet, Harley Quinn sees him as just another man and it is her personal duty to “fuck ‘em up.”

A lot can be said about the undeniably eccentric mind of Harley Quinn. In “Suicide Squad,” she was referred to mainly by her looks and her batshit craziness but now she is portrayed as fearless, loving and vulnerable, all the while being totally insane. There is also no question of her badass fighting moves and lack of hesitation to break a leg or two. Luckily, the fight scenes in “Birds of Prey” are never in short supply and include some of the most visually engrossing scenes of the movie. Harley Quinn’s gymnast-level form and off-the-wall weapons make for sequences that could only be pulled off by her.

In the group fight scenes, there were also some great examples of female support and teamwork. From handing over a hair tie mid-battle to celebrating victory with compliments, apologies and tacos, the wholesome comradery is hard to find in action movies today. Yet, even after forming these female connections, Harley Quinn maintains her mischievous persona and ditches the others to continue her life of crime. The other heroines move on to form a do-good group called the Birds of Prey that we can only hope will reunite with Harley again in future movies.

In “Birds of Prey” it’s the little things that make all the difference, and we can thank Cathy Yan for that. Yan, a little known director, brings her perspective as an Asian female to the screen. Throughout the movie, women were supporting and protecting each other from ill-intentioned men. There were even some scenes of sexual assault, some that could be prevented and some that couldn’t, but the movie didn’t let these moments pass lightly. They were meant to send a message about the challenges that women have to face on a daily basis. Another significant feature in the movie is the existence of two canonically queer main characters: lesbian detective Renee Montoya and Harley Quinn herself as bisexual. 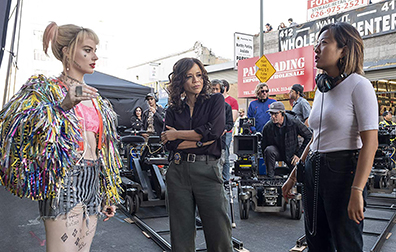 These identities are based on the original comics and have candidly made their way onto the big screen, albeit as more of a side note than an actual storyline. However, according to an interview by PrideSource with Margot Robbie and an interview from The Wrap for Yan, both say they are open and excited about the possibility of a relationship between Harley Quinn and another DC villainess, Poison Ivy, who have been confirmed as romantically involved in the comics. This relationship could be a healthy change for Harley Quinn compared to her codependent and abusive relationship with Joker in the past.

It will be very interesting to see where the DC movie series goes from here. With the introduction of “The Suicide Squad” reboot in 2021 and a probable sequel to “Birds of Prey,” Harley Quinn will have the oppurtunity to steal the stage for years to come.