This past weekend marked the ninth annual Long Beach Comic Con. Every year, geeks, nerds and everyone in between gather downtown for a pop culture celebration. I spent a day in the midst of it all.

There is a hierarchy when it comes to comic conventions. The convention popularity ranking starts with mainstream, big-ticket sellers like San Diego Comic-Con, WonderCon, and Anime Expo.

The smaller fry are events with weird names or very niche subjects. For instance, my hometown of Pasadena had Power Morphicon and BotCon. Both were respectable affairs, but you wouldn’t get much out of them unless you were deeply invested in Power Rangers or Transformers.

Long Beach Comic Con falls in the mid-range spectrum of convention hierarchies. It’s not quite as glamorous and dizzying as San Diego’s but it’s still a big deal.

Once I arrived to the event, parking was a mess, as always. The convention’s parking lots quickly filled up. My girlfriend and I were funneled through detours to The Pike’s parking garage and after a quick walk across the block, we began our search for the entrance.

As we arrived, the morning rush of con-goers had died down so finding our way inside felt akin to finding the Death Star’s thermal exhaust port. 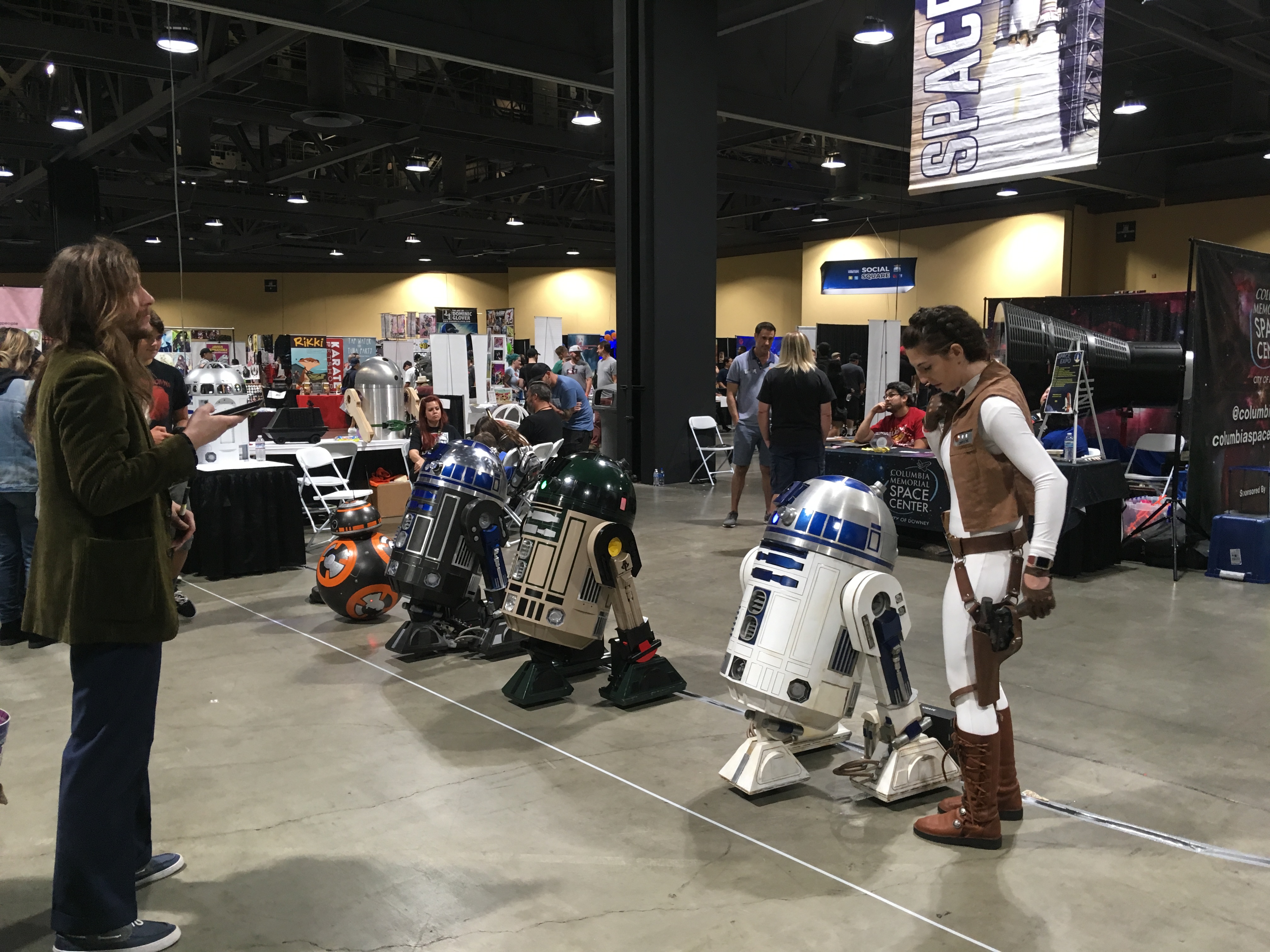 Deeper into the massive Convention and Entertainment Center, stormtroopers and Sith Lords were gathered for a photo shoot. It was a sign that we were close to getting in.

A group of people were lined up at a large glass door entrance and we entered out of curiosity. To our surprise, we saw a high-end ballroom full of socialites in tuxedos and dresses. I felt underdressed with my dirty biker clothes and bloody, barbed-wire bat. A security guard walked up to me and kindly asked, “Are you in the right place?”

We finally found the entrance to the convention in a dark corner of the building. Its rectangular, cement structure was not unlike a Death Star loading bay. As we entered, more stormtroopers and clone troopers were filed through metal detectors. A woman in a black uniform yelled out directions while people at the information desks got their QR codes scanned. It felt like I was being enlisted for the Empire.

I was having trouble pulling up my ticket, but the staff was happy to search for my name manually. Unfortunately, they found out the tickets I purchased were valid for Sunday only.

My girlfriend and I had been planning for a Saturday trip. I couldn’t have made that big of a mistake.

Normally you can swap your tickets in case of a mistake like this, but as ours were complimentary, there was nothing that could be done. We quickly shifted around our schedules and decided to come back the next day. 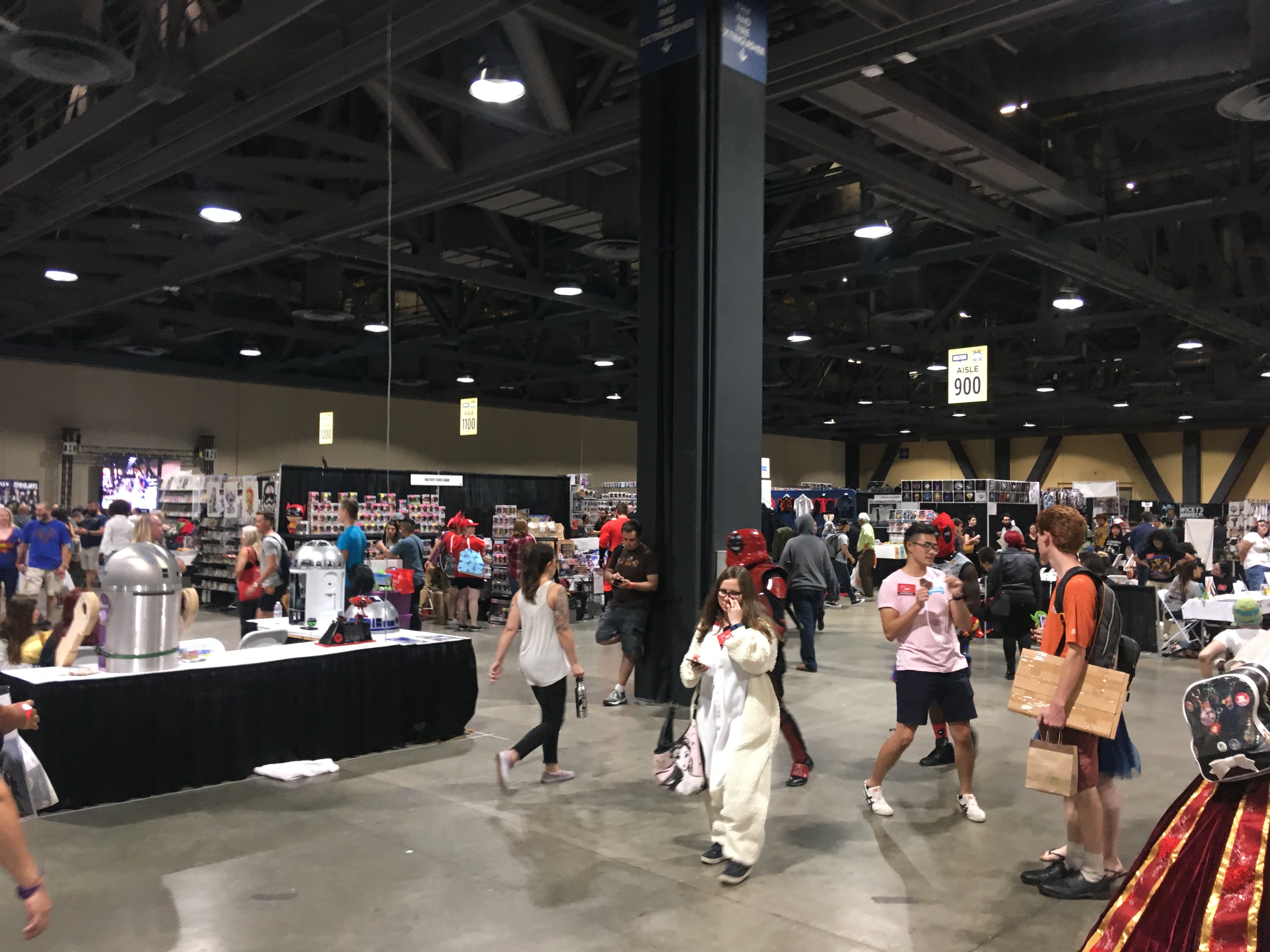 Sunday, the last and calmest day, housed a smaller crowd of people, which made it easier to walk around the exhibit hall. Cosplayers had beautiful spaces to take photos, collectors had no shortage of toys and comics to be found, and film nerds had a place in the annual GeekFest Film Festival. Smaller artists got to show off their work and I even bought a piece that parodied Edvard Munch’s The Scream with Nintendo’s Kirby. Looking at the special guests this year, one could be forgiven for thinking this was a horror convention. Many actors from Twin Peaks and the motion capture actor for Leon S. Kennedy of Resident Evil were present. I even talked to a video game voice actor named Dino Andrade for a bit.

“How did you break into the industry?” I asked.

For a long time, I had become cynical about conventions and nerd culture. I was uncomfortable with the commodification of art, the increasing cost of entry as nerd properties become more profitable, the rampant advertisements, oversexualization of cosplay, and zoo-like nature of B-level celebrities and artists at designated booths.

Returning to a convention for the first time in years shifted my perspective. Similar to the Dark Side, the negative aspects always exist in some form but a convention is about exploring the things we love and sharing it with loved ones. I saw plenty of happy couples parading their cosplays, and best friends sharing obscure jokes.

There’s something beautiful about a comic convention that’s able to bring people of different backgrounds together even if it comes with a darker side. But unlike in “Star Wars,” the Dark Lords of the Long Beach Convention Center will be happy to take a photo and give you a high five.