Are you there god? ‘Cause we’re all fucked.

March 11, 2020
Both Joe Biden and Bernie Sanders have cancelled rallies because of the pandemic, but Biden is likely to be the Democratic nominee (for now). Between him and Trump, I think I’d rather book a cruise, make out with a stranger and take my chances with Covid-19 than have to endure either another four years of Trump or four years with a creepy old man who thought he was running for senator for a quick sec. Both Sanders and Tulsi Gabbard refuse to drop out (for now) but it looks like we’re stuck with the other two (for now). Poor old Bernie looking like he doesn’t stand a chance (in the elections or against coronavirus).

September 11, 2020
Finally, a reason to be happy on 9/11! Mike Pence, secretly contracted with coronavirus, has died. Trump continues to tout his “natural” scientific “knowledge” as he shakes hands with supporters at a rally, then promptly moves to stroke his face for a total of 6.7 times per minute. He kisses a baby on the head, who immediately wilts and dies in his mother’s arms.

November 3, 2020
Picked the lesser of two evils, signed my soul away to the devil and voted for Biden. Only god can judge me now.

November 16, 2020
Trump has mysteriously not appeared on television in nearly a month now and Biden was seen walking in and out of a Whole Foods, apparently looking for Purell, only to find it’s out of stock, only to immediately forget it’s out of stock, and reentering Whole Foods to look for Purell. This, as captured by surveillance footage in the parking lot of the Whole Foods, goes on for six hours. Kamala Harris, the running mate Biden chose to hammer the final nail in his “I love black people and they love me” coffin, finally shows up to escort him back home. Biden’s mental health clearly deteriorating. America will probably elect him anyway. 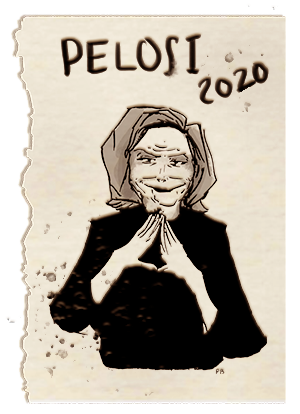 November 26, 2020
First Thanksgiving I’m thankful for — Trump, after taking one bite of a Big Mac at his traditional Thanksgiving dinner, keeled over and died. What’s next? everyone is wondering. The camera pans over to Nancy Pelosi, her paper-thin lips curling into a nefarious smile, but nobody sees it. Meanwhile, the White House is scrambling to find a way to preserve Trump’s orange-sprayed skin postmortem, as demanded in his will.

December 14, 2020
The autopsy report is in and reveals that McDonald’s didn’t necessarily kill the president — he, too, had secretly contracted coronavirus, allegedly from Stormy Daniels, who also had it but recovered, and might have otherwise survived if his immune system was not weakened by his consistent “Super Size Me” diet. McDonald’s stocks have plummeted; Burger King is making a come-back. This is the lowest point in humanity.

January 6, 2021
Headlines in “The New York Times” this morning: “Joe Biden formally elected President of the United States, Kamala Harris as his Vice President.” Harris is noticeably absent; Biden gives a speech without forgetting who he is. Is that hope, dare I say?

January 13, 2021
Harris has been out of public eye for over a week now. Speculations about her contracting the coronavirus have arisen. Inauguration in a week.

January 20, 2021
Joe Biden was sworn in today, without his VP: Kamala Harris, who seems to think the U.S. is finally getting the demise it deserves, skipped town a week ago and reportedly has sought refuge in India. America hoping that Biden’s got this.

January 22, 2021
America fucked. Biden forgot he was president. He was missing from an important meeting at the White House this morning to discuss what to do about Harris’s replacement. He was found at Thomson Elementary School, about six blocks from the White House, donned in khaki shorts, Nikes, a sweater and a crossing guard vest, directing early morning traffic. He has been admitted to the George Washington University Hospital, where he will remain under close surveillance by doctors and his wife, and will eventually move into a nursing home in his quiet hometown of Scranton, Pennsylvania to live out the short rest of his days. 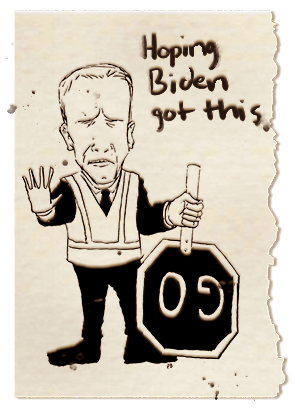 January 24, 2021
Country in state of panic. Nobody knows what to do about the presidency. Mexico has closed its borders and built a wall to keep illegal Americans out and even Canada has begun construction on a physical border for the first time in history. There is one solution, but nobody wants it.

February 1, 2021
I am writing this over a year after the coronavirus pandemic broke out, in self-quarantine on the last safe place on Earth: Catalina Island. Nobody knows I’m here, nobody knows I’m alive; the only consistent communication I’ve received is from my loan borrowers, passively reminding me that if I begin paying my loans back now, I get to save myself from a little less debt later. Just a little.

I am watching the inauguration of Nancy Pelosi, who is grinning like the Grinch from inside her hazmat suit, the tip of her pearls visibly gleaming from the fiber glass designed to frame her tissue paper face.

The U.S. is the only nation in the world that has been unable to contain the virus, whereas the rest of the world has recovered. Pelosi’s inaugural speech gives us no new hope to move forward from; rather, it runs more along the lines of one big, long troll with prominent “I told you so” undertones. However, I gotta say, it’s a lot easier to not be concerned about the future of your democracy when one, there doesn’t seem to be one anymore and two, you’re living in solitude on an island about 30 miles off the coast of Southern California. I have hope to rebuild civilization here on the island, the last safe quarantine on Earth.

Editor’s note: This journal was found during an excavation of the ruins of Avalon, Catalina Island on October 1, 2032. The skeletal remains of what is believed to be the author were also found nearby. Cause of death seems to have been coronavirus infection.