by Thom Joe Von, Beatrice Vega, and the 22 West Staff

Ellington and the rest of the iced-out, lace slip dress-wearing crowd are here, lined up outside of the 44 E. Speakeasy and Opium Den, to pulsate with anticipation for the strike of the clock, the bell of the ball to drop and the roar of the new year, 2020, to be heard.

“Oh, flapping’s just the cat’s meow, doll,” Ellington said. “It’s all about being a Zelda, slinging hooch, twerking the Charleston and all that jazz.”

Ellington’s Insta, @CanCanAndJiggleWatts, focuses on burlesque dancing, self-care and how to make it as a flapper in the 2020s. Her key piece of advice is being scrappy, becoming the big cheese and having a hop of a time. 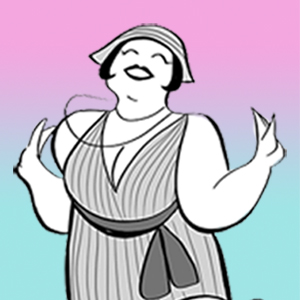 On the other hand, Ellington’s silk kimono and red cloche hat-donning compadre, Dorris Daly, sees being a flapper as all about landing a daddy, a dudded-up dapper, being a regular don out for monied dongs.

“Not to be a gimlet, Lacey, but what good is hopping and hooching if you ain’t in it for the greenbacks?” Daly said. “These lips are sealed ‘less you so happen to be a 49er that struck it rich.”

Daly—an heiress to Gould, Hearse and Koch fortunes — has gained quite a following as a “classical liberal” crypto-facist beauty vlogger and emphasizes the importance of purity, property and liberty as core values for the contemporary flapper.

Lastly, the tuxedo and fedora-clad Rosa Amador-Suarez, a latinx small business owner, bases their flapology on inclusivity, body positivity and just being the cat’s pajamas.

“It don’t take a gumshoe to figure that flapping ain’t just for dolls, dames and bean pickers,” Amador-Suarez said. “Listen babe, I’m absolutely ducky over anyone calling themselves a flapper. He’s a flapper, she’s a flapper, they’re a flapper. It’s 2020 bitch, we all flappers.”

With the new year being just around the corner, our trio of dudded-up flappers mull over their hopes, dreams and resolutions for the new decade.

Ellington and Amador-Suarez specifically are looking to turn their craft bathtub gin hustle into a legit, tax paying enterprise while also breaking into the black market vape pen business in the new year.

“After getting chewed out by them temperance Trotskies, me and Rosa decided that maybe it’s time to diversify outta the hooch game,” Ellington said.

Yes, it is quite the bee with knees. [Disclaimer: bathtub hooch causes blindness and black market vape pens are linked to exploding lung.]

But it isn’t going to be all martinis and Manhattans in 2020 for Daly. The facist fashionista made her worries about the upcoming election clear.

“One of my family friends, who we’ll just say is the big cheese of this fine republic, might be outta a job and, hon, that just takes the pep right outta my step,” Daly said. “It’s a real tragedy fam. I gotta reconsider this whole arranged marriage business with Barron.”

All of that said, Daly hopes for a Joe Biden nomination since, “that dandy Hunter kid, ya see, is quite the snack. I’d happily invite that Biden boy back to my boudoir for some booger sugar and to eat my cake any time.”