Interview and Photos by Isaac Kau and Alex Nguyen

Paul Smith is a composer and guitarist from Fresno, CA who attends CSULB as a double major in jazz guitar studies and music composition. His songwriting is influenced by Sacred Harp Hymnal as well as the traditions of American folk music. He is accompanied by Zack Caplinger and Arend Jessurun.

Q: Can you describe your sound as a musician?

A: It's so hard to describe it, [...] I think adjectives maybe like meditative and peaceful. Folky. I take a lot of inspiration from just the American folk music tradition and the sacred heart hymnal, which are both [...] American music forms and a lot of acoustic instruments.

Q: What music do you like to listen to?

A: I have like three artists that I really love to listen to right now. Sam Amidon, Norah Jones and a duo of Julian Lodge and Chris Eldridge. Oh, actually four—The Milk Carton Kids. Those four have just been kind of the soundtrack to my commute and my life lately.

Q: And you like to transcribe those artists’ songs?

A: Yeah, totally, especially with Nora Jones, I like to take her songs, and make arrangements of them for solo guitar. I have a dream of creating a book of her whole first album, arranged for solo guitar. 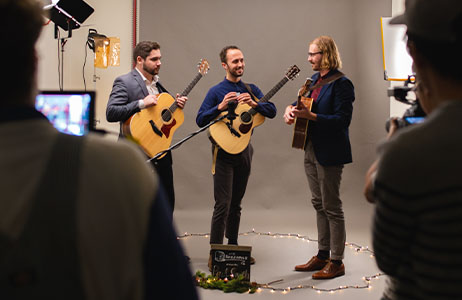 Q: How do you know Zack and Arend?

A: I know Arend through a connection of a Christian fellowship that I’m a part of. I met him through InterVarsity and he was at Cal State Long Beach before I was, but then we kind of [...] started hanging out. And then I met Zach through mutual friends that play jazz together and through the jazz scene in Long Beach and LA. Also, I didn't even know this about him at first [but] his childhood and his youth in music was also kind of influenced and steeped in bluegrass. So when I found that out, we just started connecting.

Q: What are your hobbies outside of music?

A: I love to hike and I love to camp. It's been hard to do that in the past three years and I feel like it's been a huge part of me that's missing. It almost feels like in the rare chances that I get to go up in the mountains [...] that's an incredibly rejuvenating thing for the deepest part of me. It’s almost more than a hobby. It's a spiritual, soulful, nurturing thing.

A: I think a big thing for me is being outside reminds me of, at least in my beliefs, the creation around me that God created [...] And just in the stillness and quietude that's in the mountains that can't really compare to what's in the city that I'm normally in [...] is in a way as parallel to what my music feels like to me.

Q: So you just had a composition recital. Can you tell us more about that?

A: I had my senior composition recital and I had to gather performers—which are basically just my friends, which is so fun—to put together ensembles to perform the music that I wrote. And it was really weird ‘cause I'm so used to performing, but this time I sat in the audience and just listened to my music and it was pretty surreal and kind of a difficult thing ‘cause it felt like I had to let go of complete control. But overall it was a really nice sense of closure on that part of my life. 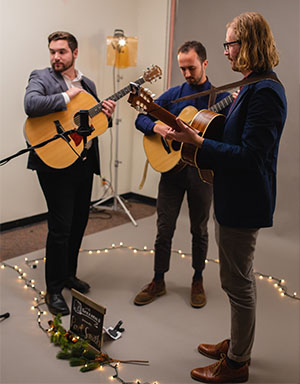 Q: What has your journey to becoming a musician looked like?

A: I remember the first time I ever picked up a guitar was at a camping trip [...] my friend just brought one [...] and he taught me the first song that almost every guitarist learns, “Smoke on the Water.” And I remember I was like, “Wow, I can do this.” But then I tried to learn other things on my own [...] [and it was too hard. I put it away for awhile, but then I came back to it. It just felt like a very natural expression to me.

Q: How do you want your journey to look from now into the future?

A: I'd love to just tour with my own music. I also really want to tour with any artists that would love to take me on. As I did both of my degrees, I realized that a huge part of my heart for music is in performing. So I just really hope to keep performing a lot. 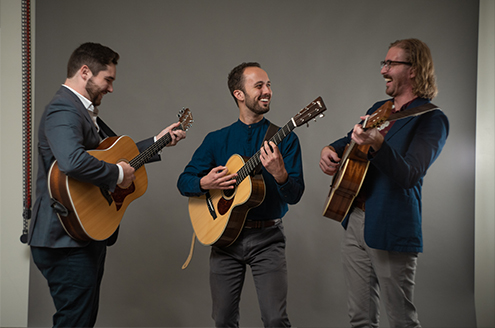